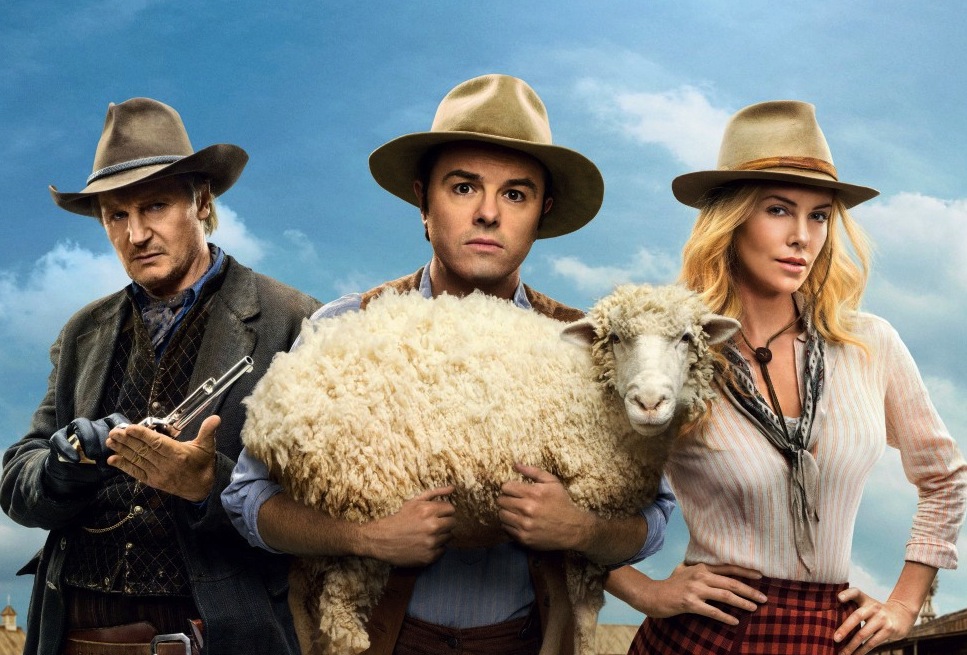 Thanks to Universal we got to see A Million Ways to Die in the West before its release on Thursday 29th May. This is our review of the film, but – as usual – no matter what we say, we recommend that you still go to your local cinema and see the film because there is no better critic than yourself! Given the poor box office performance of films with ‘West’ in the title (think about the travesty that was Wild Wild West) or even last years’ calamitous Lone Ranger remake, the wild-west has not been kind to film makers of late. Add to it an inexperienced lead actor in the driving seat, and you have the makings of a real flop.

With AMWD Seth Macfarlane steps out of the audio studio to direct and take on his first leading man role as mild mannered, cowardly cowboy, Albert Stark (no relation to Tony-I think, maybe a distant uncle?), who’s been left heartbroken after the break-up of his relationship with Louise (Amanda Syfried). Louise has left Albert because he is terrified of everything and hates the west because, as he puts it in the film, ‘everything that is not you is trying to kill you’. But his cowardice, whilst a flaw to Louise is what has kept him alive until now.

Enter Anna (Charlize Theron) to Albert’s one-horse town who immediately befriends Albert and is won over by his charming and selfless nature. The pair bond over their hatred of the west and quickly hatch a plan to win back his beloved Louise. Unsurprisingly, and a little unrealistically as there is little to no development in their relationship, the two fall in love but there’s one problem – Anna’s quick draw husband Clinch Leatherwood (Liam Neeson) the fastest gun in the west.

There can only be one ending – a dual at noon.

Up until now the film has exhibited many of the traditional western characteristics; meandering gunmen, brothel whores, bar fight, death, death and more death, along with a little drunken horse riding thrown into the mix. But this is where the film takes a very Macfarlane twist as whilst preparing for the dual, Albert is captured by an Indian tribe. While talking to them about his problems, as you do with Indians, he ingests some drugs that make him hallucinate. In the scene, there are floating mountains and floating sheep, sheep on stilted legs, and a sheep dressed as his original love rival, the new boyfriend of Louise – Foy (Neil Patrick) – complete with sinister moustache and bowler hat.The psychedelic nature of the scene aside – it lacks any of the humour that has punctuated the film throughout and seems to have been added at the last minute as it delivers nothing and does not advance the storyline. Although it is quite funny when Albert kicks the giant vulture in his giant vulture testicles – you’ll just have to see it to understand.

When he returns to the land of the living he has renewed gusto, partly thanks to some Indian ingenuity that will help him win the dual and get the girl – if he can just shoot straight. Putting Macfarlane’s performance into context we need to explain we’re massive Family Guy fans and spent the last couple of weekends wading through the recently released season 13 DVD boxset. So we couldn’t help but hear Brian speaking throughout the film – demonstrating his possible lack of thespian ability to adapt his vocals. Macfarlane’s inexperience in front of the camera also betrays him at times as he adopts the same doughy-eyed stare for most scenes (which is a lot as he is virtually in every second of the film).

But what he did do well was to surround himself with an A-List cast of brilliant actors and a number of amazing cameo’s, one of which is ingenious and alone is worth the film admission. Theron and Neeson are great too – although Neeson doesn’t feature all too heavily until the last quarter of the film. Giovanni Ribisi and Sarah Silverman steal the show though as the best friends of Albert who are shy and sweet, in a loving but celibate relationship despite one of the two being a brothel whore famed for her bedroom antics. This couple are responsible for some of the funniest and most awkward scenes in the film relating to her work including some truly disturbing references to her breathe and some cheek residue.

Outside of that relationship, the film has other moments of genuine comedic gold which demonstrates Macfarlane’s genius comedic writing and his comedy timing. This is highlighted by the inventive ways he has devised for people to die throughout the film that would rival the Final Destination franchise and are exceedingly humorous.

But there are a few jokes that miss the mark entirely. Couple that with the fact that all of the characters speak as if they have been plucked from the future and dropped in 19th century Arizona and the film loses some of the allure of the western genre.

Whilst AMWD has elements of what made Blazing Saddles and Maverick successful comedy Westerns and some of the slapstick of the Three Amigos, it gets derailed at times due to the lack of a credible leading man and the outrageous script which could have been toned down a notch, falling just a tad shy of being a truly rootin tooting good time.