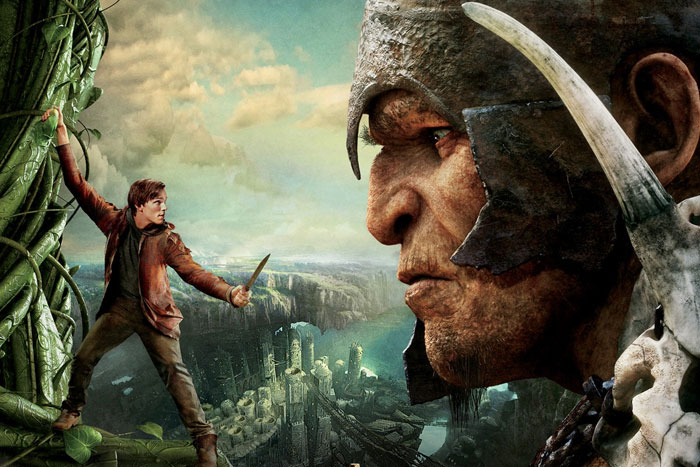 Thanks to Roadshow Films, we had the chance to see Bryan Singer’s Jack the Giant Slayer before its Australian cinematic release. This is our review of the film – but as usual – no matter what we say; we recommend that you still go to your local cinema and see the film because: There is no better critic than yourself! Jack the Giant Slayer  is the re-imagination of a classic tale – Jack and The Beanstalk – following the adventures of Jack (Nicholas Hoult) who believed in the legend of the giants since he was a child. The giants were trapped in the sky by a powerful king called Eric and many generations later, the princess fiance Roderick (Stanley Tucci) wants to ensnare the magical crown which holds the key to unleash the giants and take over the kingdom. One ordinary day, Jack’s fate takes a turn when he goes into town to sell his horse but got involved in a brawl with the princess Isabelle (Eleanor Tomlinson) present at a stage play, until her loyal bodyguard Elmont (Ewan McGregor) rescues her. Whilst leaving, a strange monk on the run from royal troops gives Jack some magic beans to exchange for his horse which will inevitably change the course of history. Isabelle also escaped the palace to get out of her impending engagement to Roderick where she stumbled upon Jacks house in the rain. It all seems to go well until the beans touched water, spurring a massive tree to grow into the sky, there the giants have been waiting to revenge for the wrong done on them.

Jack the Giant Slayer  is one of the biggest blockbusters this year in terms of budget and scale but despite being visually stunning and original with outstanding CGI characters, it’s far from being a cinematic masterpiece, as the script (screenplay by Darren Lemke,  Dan Studney and Christopher McQuarrie, story by Lemke and David Dobkin) is extremely simple and doesn’t have much to add to the original story, even with such a big team. The film takes a while to get into action but it is a fun flick enjoyed by the family as the giants, although evil are quite cartoonish, especially their leader Fallon (voiced by Bill Nighy) who has two heads (the second Gollum like) which seems very silly at times.

Performances fall into a rollercoaster of computer generated characters and special effects but Ewan McGregor and Stanleu Tucci still do a good job of their hero and villain roles.

Overall, Jack the Giant Slayer is a fun film for all ages as it doesn’t try to be more than it promises on the trailers. A basic script yes, but director Bryan Singer delivers amazing visual effects, cool characters and epic battles that will surely entertain.

Jack the Giant Slayer  is now showing in Australian cinemas