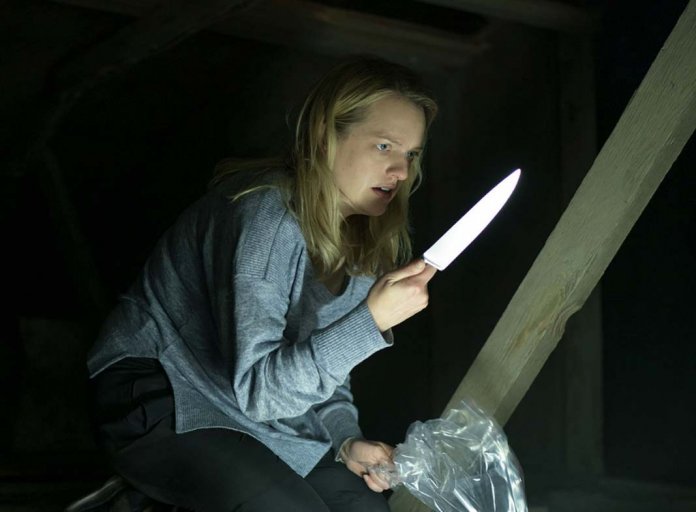 The fear of being watched, that somebody is following your every move, is a fear that you can safely say is a common paranoia. There’s something sinister and creepy, but obvious in the idea that Australian director Leigh Whannell has created the latest variation of classic HG Wells’ story, The Invisible Man. But rather than retreading the bandaged mysterious figure wearing sunglasses, hat and trench coat, he instead flips the script somewhat in the eyes of the victim rather than of the scientist gone mad..

Cecilia (Elizabeth Moss) escapes an abusive relationship with her optics engineering genius boyfriend Adrian Griffin (Oliver Jackson-Cohen). Remaining fearful for her life and convinced he will come after her, she seeks refuge with her detective friend James (Aldis Hodge) and her sister Alice (Harriet Dyer). When told of his eventual suicide then given a share of his wealth, she suspects his death is a hoax. After a series of deadly coincidences, Cecilia must attempt to prove to those around her that she is being hunted by an invisible man. 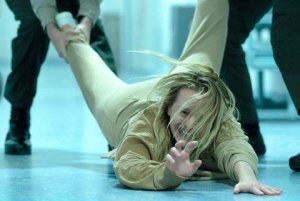 In the wake of the collapse of Universal Pictures attempting to recreate their monster movie franchise as the Dark Universe, the studio held back from planned projects hoping people have also forgotten about The Mummy (2017). Writer, director and occasional actor Whannell, renowned for his horror thrillers such as Saw, Insidious and most recently Upgrade was asked to try to come up with a stand-alone film. The 2020 adaptation sees the film focusing on the woman’s point of view and incorporating that fear of being chased by an invisible predator.

Moss’ performance in this film is exceptional, with much of her fear and terror being conveyed across her face. Reacting to nothing in moments of dread with limited dialogue is always believable.. We then start to see the evolution of her character from traumatised and a victim of abuse to then realising the only way she would be free is by taking things into her own hands.

Thematically the movie examines domestic violence, and the lingering mental trauma that remains after leaving an abusive relationship. Gaslighting and the downplaying of the character’s situation only serves to keep raising the tension and anxiety levels and for any women watching, this can be both triggering and infuriating.

Whannell ramps up the fear and anxiety through multiple ways. Some of the location shots and cinematography by Stefan Duscio as well as the music by Benjamin Wallfisch also help to create a moody atmosphere. But where the director excels is in a minimalist approach. Panning and tracking the camera to spaces in the room and leaving it there for a few seconds before panning back. The suspense building with each movement as we strain and squint to see if there’s something, or more correctly someone, there. Then there’s some good classic jump scares and gory bits thrown in for good measure. Which all adds up for a very nifty solid psychological thriller horror film.

Where the film does fall down a little is how far you can take your disbelief, certain reveals left unexplained are plot holes to keep up pace. There’s one very obvious bait and trap moment where Cecilia climbs up into a roof cavity and you can definitely guess what happens next. And also the passing of time seems a little wobbly, we are only once explicitly told that two weeks had passed so we don’t get a real sense of how long it has been. And also personally I’m not a fan of jump scares and scary movies in general but that’s just me.

There’s only a few nitpicky things that should you choose to pull on that reality thread a little hard, some of the curtain may start to fall away. But that’s only if you think too hard about it. For a film on a meagre $7million budget, this has ended up looking remarkable. If you like your psychological thrills taut and pulling on your anxiety chain, The Invisible Man will definitely scratch that itch.