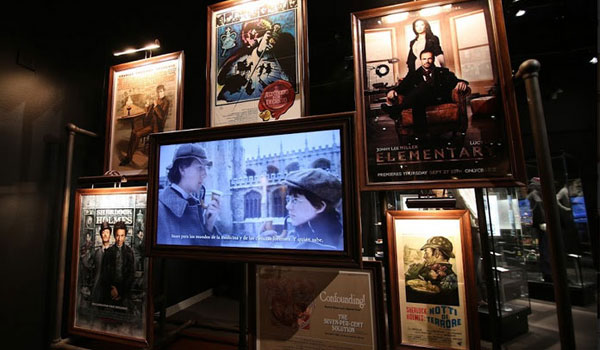 TO SYDNEY MY DEAR WATSON, THE GAME’S A FOOT!

Super sleuths will have their skills tested when the Museum of Applied Arts and Sciences (MAAS) presents The International Exhibition of Sherlock Holmes. This interactive journey into the world of the most famous detective premieres at the Powerhouse Museum on Saturday 3 June 2017.

In the first tour outside North America, exhibition visitors will be transported back to Sherlock Holmes’ Victorian London to help solve a captivating mystery and will have the chance to crack the case by conducting their own experiments. Before taking on the challenge, visitors enter Sherlock’s world and explore the study of Sir Arthur Conan Doyle, doctor-turned-author and the man behind the legend. Featuring over 350 objects, see original manuscripts and first editions, visit one of the world’s most accurate recreations of 221B Baker Street, the home of Sherlock Holmes and his trusty sidekick Watson and immerse yourself in the most comprehensive display of Sherlock pop culture items since his creation 127 years ago.

So whether you’re a Sherlockian fanatic, have a keen interest in science and history or just a fan of pop culture, an ear to the ground and an eye for observation are elementary when The International Exhibition of Sherlock Holmes opens at the Powerhouse Museum.

“Sherlock Holmes is one of the most treasured figures in literary history. Sir Arthur Conan Doyle’s world of investigation has leapt off the pages of books and into the hearts and minds of millions of people around the world,” said MAAS Director, Dolla Merrillees.

“The Sherlock mysteries span nine books and countless adaptations, making him the most portrayed literary human character in film and television. This exciting exhibition takes you beyond a world of imagination and allows you to assume the role of the detective, conducting footprint and blood splatter analysis, examining botanical samples and trying your hand at chromatography all to solve the mystery,” said Ms Merrillees.

Visitors will learn how Sherlock Holmes, a scientific expert ahead of his time, used seemingly trivial observations of clues to solve some of the era’s most puzzling mysteries. The practices and techniques devised by Conan Doyle led to changes in the way police work was done, many of which remain in practice today. This exhibition is brought to the Powerhouse Museum through a unique arts partnership between Exhibits Development Group (EDG); Geoffrey M. Curley + Associates; Conan Doyle Estate Ltd.; and the Oregon Museum of Science and Industry. This is the first time a Conan Doyle family member has been involved in a Sherlock Holmes exhibition.

“The Conan Doyle Estate can’t remember an undertaking as involved and exciting as this one,” says Conan Doyle Estate’s literary agent Jon Lellenberg: “Museum visitors will experience the scientific and literary ideas that inspired Sir Arthur Conan Doyle to create Sherlock Holmes, and Holmes’ methods for investigating and solving crimes as the world’s first consulting detective, and they will visit their two worlds, including the very rooms in which all this took place.”

Tickets will go on sale in March 2017. The International Exhibition of Sherlock Holmes opens Saturday 3 June and runs until Sunday 29 October, 2017.