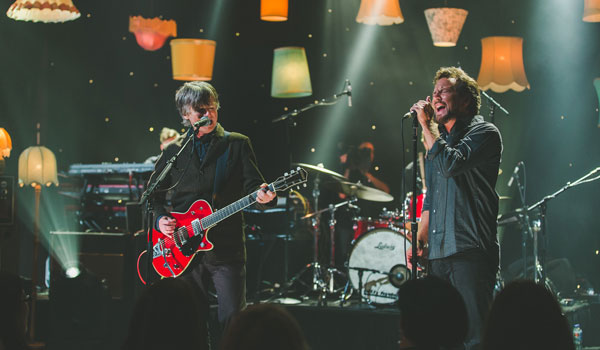 Every now and then you experience a performance that stays with you long after the final chord, infiltrating your heart and mind and leaving you in awe. Such can be said for Neil Finn’s memorable performance this evening for the MAX Sessions in Sydney, which included a surprise appearance by Pearl Jam frontman, Eddie Vedder.

In front of an intimate audience, all keen to see the master singer-songwriter at work, Neil Finn took to the stage to perform a collection of material from his classic songbook – a mix of Crowded House, Split Enz, Finn Brothers, as well as songs from his forthcoming solo album Dizzy Heights ahead of its February 7 release.

The legendary artist, flanked by his band (including his wife, Sharon), opened the night with ‘Pony Ride’ and ‘Flying In The Face Of Love’ off the new record. Ever captivating, Neil Finn had the audience hanging on to every line of Crowded House hits ‘Fall At Your Feet’ and ‘Distant Sun’. Throughout the performance he moved through a mind-blowing set of songs, from the new, including ‘Impressions’, ‘In My Blood’ and ‘Dizzy Heights’, to his songs that are etched deep into the psyche of generations; ‘One Step Ahead’, ’Message To My Girl’ and ‘I Got You’. At one point he was even taking requests from the audience.

Then came the moment that no one was expecting. For the encore, Neil invited his good friend  Eddie Vedder from Pearl Jam on to the stage to join him.  Two of music’s greats, united on the MAX Sessions stage to perform together an incredible acoustic cover of the Hunters & Collectors classic, ‘Throw Your Arms Around Me’ to a standing ovation. They then treated the crowd to Split Enz’s, ‘History Never Repeats’, with Vedder taking the reins on vocals. Afterwards Neil exclaimed, “That was too much fun” and so they played the song all over again.

With the audience still in shock from the surprise performance, Neil and his band went on to close the night with one of the biggest Crowded House hits, ‘Weather With You’. The honour of being in the company of not one, but two of the world’s greatest musicians was not lost on the audience, and everyone was left wanting more.

The MAX Sessions is Australia’s original and longest-running concert series. Since its inception in 2003, the award-winning series has developed an illustrious tradition of delivering extraordinary and unique live performances from well-loved local and international acts.