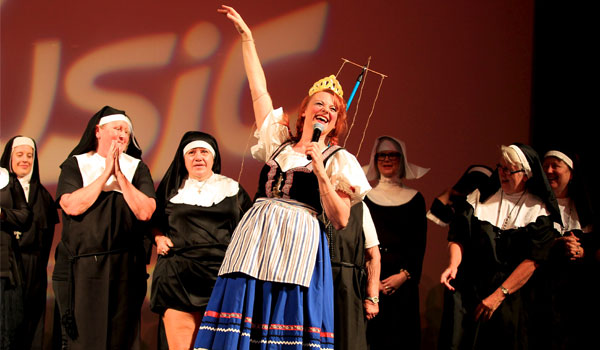 Primp your finest curtains, perfect your do-re-mis, and prepare for a celebration of all your favourite things – because Sydney’s beloved Sing-A-Long-A Sound of Music is returning to the State Theatre for two very special shows next month on February 25th, 2017.

The opulent historic State theatre will act as a European-style backdrop to transport Sydney audiences to the Austrian Alps for the matinee (1.00pm) and evening (7.30pm) shows. Coming to life for a historic 16th consecutive year, Sing-A-Long-A Sound of Music is the longest running live event in the State Theatre’s prestigious 87-year history.

Frauleins and Friedrichs, Louisas and Liesels, Baronesses and Brigittas will join together to revel in an unforgettable interactive experience that makes the audience the star of the show – in a rousing celebration of the greatest musical of all time!

Presented up on the big screen in all of its technicolour glory with song sub-titles to accompany each song, Sing-A-Long–A Sound of Music is a bucket list extravaganza for die-hard fans and dabblers alike.

Each year, hundreds of the films’ fanatics go above and beyond dressing to the nines with elaborate and imaginative costumes to rival those of the originals – from gaggles of nuns and brown paper packages tied up with string, to girls in white dresses with blue satin sashes. ‘Maria’s not an asset to the abbey’, but at the Sing-A-Long-A Sound of Music, she’s best in show! This year’s shows will again welcome back celebrity host Katrina Retallick, one of Australia’s foremost leading ladies with an ever-growing list of theatre, film and television credits to her name.

Katrina will lead the pre-screening vocal warm up, giving a guide to the use of the interactive fun packs and accompanying actions and – with a little help from the audience – judge the much loved and hotly contested costume parade.

“I can’t wait to be a part of the event again. The sessions are great fun – and every year someone surprises us and goes that extra mile with their costumes. We’ve even had a marriage proposal at one of the sessions a few years ago. It’s incredible how much the audience gets involved and creates an amazing vibe of group fun and participation,” said Katrina Retallick.

The Sound of Music is the most successful movie musical of all time and the number one family film. It features the most irresistible score in movie history. Released in 1965 by 20th Century Fox – written by Richard Rodgers and Oscar Hammerstein and directed by Robert Wise the film was shot in the Austrian Alps of Salzburg; and is based on the true story of Austrian singing family “von Trapp”, who became famous and toured the States in the 1940s. In the year the film was made, 2 million additional tourists visited Salzburg, Austria.

(runs just under 4 hours, including a 20 Minute interval)