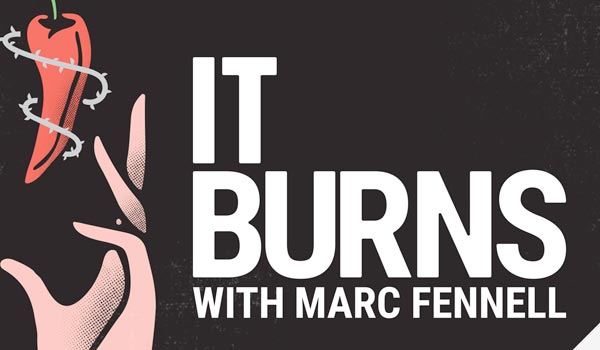 Cayenne you handle the heat? Audible.com.au has today launched It Burns, an Australian audio series by acclaimed presenter Marc Fennell (SBS, triple j) that delves deep into the cut-throat world of competitive chilli-eating and the race to breed the world’s hottest chilli. Marc explores what attracts people to melt-your-face-off pain as he gets up close and personal with a community of hardcore ‘Chilli-heads’ – those who eat chillies competitively.

It Burns: The Scandal-Plagued Race to Breed the World’s Hottest Chili is the first Australian Audible Original for the nation’s leading audiobook and audio entertainment provider. It Burns is free to listen to on Audible (for both members and new listeners) until 15th June 2019.

The series takes listeners from the Australian Coast to South Carolina (via an Indian Research Facility) following long-held allegations that an Australian chilli-growing family was cheated of a Guinness World Record. As a chilli lover himself, Marc discovers the race is about much more than this spicy fruit as he digs into a dark, unforeseen cultural underbelly. It’s about how people use pain – whether it’s their own or others’ – to shape and define their sense of self and feel more alive.

Marc Fennell, It Burns Host and Australian Broadcaster, said: “Creating It Burns was a huge and profoundly odd challenge. I initially thought this would just be a quirky story about a few chilli farmers, I was then drawn into something far darker, more personal and challenging.”

Ben Naparstek, Director of Original Content, Audible.com.au, said: “Using intimate and gripping audio, Marc is able to go into places and unlock emotion and narrative from characters in a way that couldn’t be done in any other medium.”
“It Burns is the first of many Australian Audible Originals and reflects our commitment to supporting talented story-tellers to deliver compelling and high quality audio experiences to a local and global Audible audience.”

Recently, Audible.com.au announced a slate of nine Australian Audible Originals launching in 2019, including a true-crime series set in the Northern Territory hosted by renowned news journalist Mark Whittaker and a scripted drama from author Nikki Gemmell about female friendship and the next phase of life. In addition, a reimagined Nordic fairy tale by Juliet Marillier and a docu-series exploring modern witchcraft by John Safran will also be released later in the year.

It Burns is now available to pre-order at audible.com.au/chilli ahead of its release on 16th April 2019. The audio series will be available exclusively on Audible.