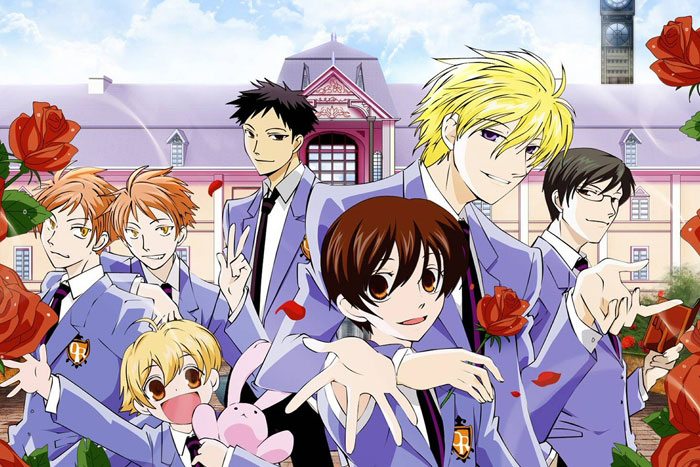 Thanks to Madman, we had the chance to see Ouran Highschool Host Club Series Collection on DVD. Adapted from a manga of the same name by Bisco Hatori, the series follows the story of Bookish Haruhi, who can`t afford to pay the expensive scholarship at Ouran High School – one of the most prestigious institutions in Japan. Then it all changes when he visits the Host Club, a place with the best-looking boys dedicated to charming their female classmates. While trying to leave the club after giving a shocking first impression, Haruhi breaks a very expensive vase, and being unable to compensate for it, he must become the club’s new member and slave to pay it off. However, he has a deadly secret…he is actually a girl!

Ouran Highschool Host Club endeavors to be a comedy series with colorful scenes, likeable characters and many super deformers’ animations. But the jokes become a bit repetitive after a few episodes and falls into the awkward category, including some weird scenes where pair of male twins only has eyes for each other. Nevertheless, it still has its funny moments, thanks to the club’s president, Tamaki Suoh, (also son of the school’s Chairman) who slowly falls for Haruhi, especially after finding out he is a girl.

The animation is seamless and the design of each character is flawless, not to mention the backgrounds change in each episode, even including a jungle set up to make viewing a more realistic experience for the female costumers in the club.

One let down though we find is the use of blinking arrows in some scenes to show you the objects of interest which was mean to be a tool to make the scenes funnier but it ended up making things predictable and boring. The extras on the DVD include the commentaries by some of the voice actors, a text less opening, trailers from other Madman releases and the outtakes for the first 13 episodes.

Madman brings Ouran Highschool Host Club Series Collection to Australia on DVD, a show that finds its own way to be funny, beginning slowly but gets interesting as it goes on.

Watch the trailer of the series here