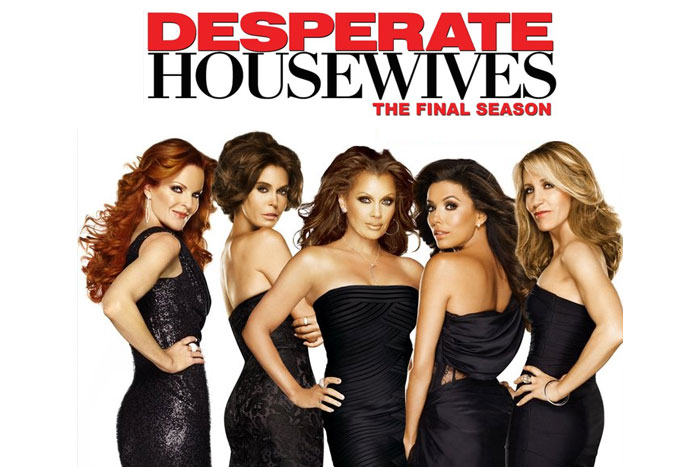 By Akane
As with all good series, after eight years of airing, Desperate Housewives comes to their end in a season packed with excitement, intrigue, good memories and friendship, romance and death. Following the big finale from Season 7, Bree breaks up with Chuck (the cop) as she can no longer hide the horrible secret, this offended him so he started stalking her out of suspicion of her every action. Being left alone by her friends, Bree enters a severe depression that leads her back into drinking, visiting bars and jumping in bed with strangers. She comes to a point where she tries to commit suicide but Renee (Vanessa Williams) catches her and begin to take care of her. At the same time, Orson (Bree’s ex) finds her one day in a bar about to get beaten by a drunken guy so he is back in her life as well. As Bree realizes what he is trying to do, she kicks him from the house while he tries to torture her in all possible ways. In the end, Bree faces her trial in court for the murder of Alejandro Perez but an unexpected turn of event Mrs McCluskey ends the conflict in a great surprise. In the meantime, we see Susan and Carlos (Gaby’s husband) struggling with guilt, as they become close friends, attracts the attention of Susan´s husband Mike. As they want to keep things simple, Susan stays away from the group and attends classes to become an artist, creating more problems. Meanwhile, Carlos finds comfort in alcohol and eventually goes to Rehab, while Gaby manages to keep the family together, visiting her husband and even getting a job. And of course, at one moment, Susan, guilty as ever, tries to make it right with Alejandro’s wife and her daughter but when they visited Wisteria Lane, they found out about the fatal accident and the horrible truth behind it all. On Renee’s end, she is trying to figure out how her new love interest – a contractor named Ben (Charles Mesure) is involved in the trial and whose financial problems brought in an evil loan-shark. Additionally, Lynnette’s family is falling apart as Tom is involved with someone while one of the twins Porter made his one-night stand pregnant (Susan’s daughter). Here dilemma rises when Julie decides to give up their unborn child for adoption while Porter is keen to helping her raise it. With all this drama, the last two episodes becomes quite obvious as they try to wrap up everything mentioned above (there’s another surprise but we won’t spoil it). We can also see the future of our housewives in the last 10 minutes of the show, moving out of Wisteria Lane to lead new lives.

Although it is always hard to come up with a good season finale, Desperate Housewives still did it even if the story becomes predictable at times, giving easy endings to problems such as a wedding, a newborn or death. Nevertheless, it is a great idea for Mary Alice to tell the story of her friends to conclude the chronicles of these housewives, hopefully no longer desperate in their future lives. You can catch Desperate Housewives Season 8 on DVD which will be out on October 3, 2012 thanks to Disney Home Entertainment. As always, it includes special features for die-hard fans such as the director’s dissertation on the show, the development of characters, footage of 8 years of filming on the set, a ‘Finale Commentary’, Bloopers and Deleted scenes.

All and all, Desperate Housewives Season 8 is an epic show finale not to be missed.