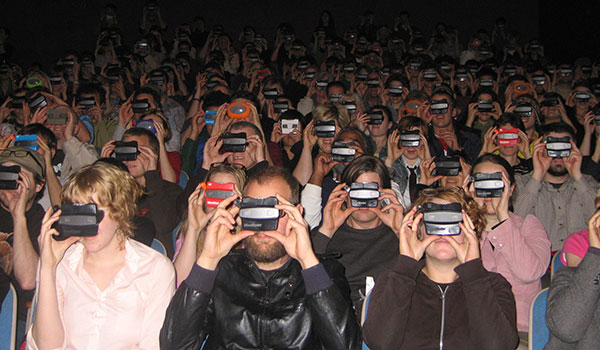 Commencing Saturday 22 February 7pm, the Australian Centre for the Moving Image (ACMI) is part of White Night Melbourne, an event that transforms the city into an all-night wonderland. Alongside Melbourne’s finest arts and cultural venues, ACMI will open its doors for this entire 12-hour event, providing free entry to a special selection of film, exhibitions and a chill-out lounge.

The unique cinema event, Tim Winton’s The Turning, created by award-winning Melbourne based director-producer Robert Connolly, will be re-imagined for White Night Melbourne in an extraordinary way. Eighteen directors from diverse artistic backgrounds each interpret one chapter of Tim Winton’s novel The Turning. Each chapter will be staged in a different environment and location across White Night Melbourne, guided by the core themes, ideas and experiences in each story. With most sites kept a secret from the audience, viewers will discover an emotive screen trail across the city engaging in a film experience like no other.

Set in a small coastal community, The Turning features stories that link and overlap, depicting important life changing moments for its central characters. Screening in the Australian Mediatheque, the final chapter Defender, directed by Ian Meadows, follows a man who is freed from the ghosts of his past.

In Gallery 1, explore music video as an art form in Spectacle: The Music Video Exhibition. With over 350 clips spanning nine decades, the exhibition examines how the art of the music video has progressed, from clips of 1920s jazz legends through to videos by Madonna, Lady Gaga, Arcade Fire and other contemporary artists. Powerful imagery and music surround the viewer as they journey through a labyrinth of interactive installations, sets, immersive environments, original props and costumes.


Gallery 2 hosts the multi-channel video work, Angelica Mesiti: The Calling. The recipient of The Inaugural Ian Potter Moving Image Commission, the Sydney/Paris-based Mesiti worked in Turkey, Greece and the Canary Islands to research and film an intriguing portrait of whistling languages, a disappearing method of communication used in isolated rural communities.


Cinema 1 hosts the Vladmaster Viewmaster™ Experience, an intriguing mix of private viewing in a communal space, where audience members are provided with a ViewMaster™ viewer and a set of Vladmaster disks to interact with two stories over a 20 minute period. A specially recorded soundtrack of narration, music and sound effects guides the audience through this wholly unique and askew cinematic experience.

Drawing on the success of last year’s 101 Zombie Kills, Cinema 2 hosts Title: Sequence, a specially compiled program of some of the most astonishing, epic and inventive movie opening title sequences ever produced. Presented with thumping sound on one of country’s best screens, the program provides a fascinating journey through the history of cinema and some of its great big-screen moments, across a range of genres.

The Lightwell will be converted into a LightLounge – a chill-out zone allowing visitors to submerge in a sound and image soaked environment. Light projections and VJ/DJs will transform the space making it the perfect place to stop and relax during White Night Melbourne.

White Night Melbourne takes over the city from Saturday 22 February 7pm until Sunday 23 February 7am, with free entry to all ACMI events between these times. For further info visit www.acmi.net.au/white-night.aspx