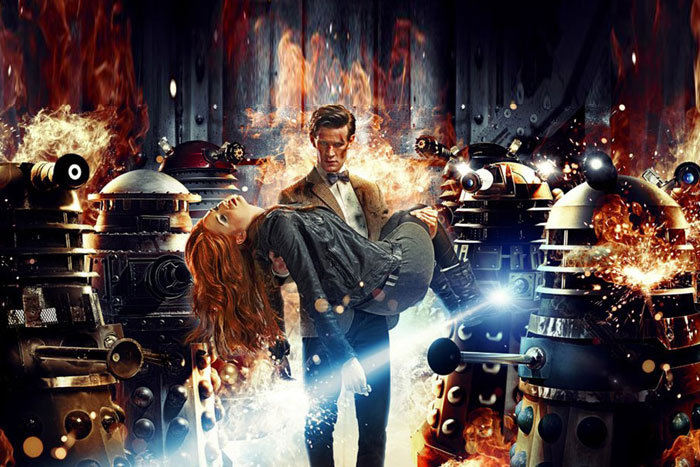 By Wanda
Spaceship full of dinosaurs, chaotic adventures, weeping angels and most of all River… follow the Ponds on their final journey with the Doctor as Season Seven Part 1 arrives on DVD and on Bluray. Doctor Who Series 7 Part 1 has now been released by the BBC.

Matt Smith stars as the Eleventh Doctor, who constantly treads that fine line between madman who knows how to play well with others, and a man you wouldn’t want for an enemy.  Meanwhile Karen Gillan is breathtaking in her final few episodes as Amy Pond. Take all your favourite episodes that you loved her in Doctor Who, stir it all in a pot, and you’ll get the mature, older take of Amy. Prone to be overlooked in some reviews is Arthur Darvill, whose Rory has delivered a dose of grounded humanity to the series since The Eleventh Hour.

Doctor Who Series 7 Part 1 is a series of well scripted episodes that lead us to Amy and Rory’s departure, which is told through 5 amazing standalone episodes which contains everything from Daleks to Dinosaurs, Cowboys and Angels.

The ups and downs of the episodes and their individual emotional hooks could quite easily leave you with your head buried in a box of tissues by the time the Doctor reads the final page of the Melody Malone book in The Angels Take Manhattan.

All in all, these are episodes that any fan of Doctor Who needs to own. Since Amy Pond first appeared with The Doctor in 2010 in Season 5 of Doctor Who, their final departure is a fitting end to the story of the Ponds. Much like previous companions of The Doctor, there won’t be a dry eye in the place as you say goodbye to Amy and Rory.

Extras
Both editions feature the following: Pond Life – an Ood for breakfast and various other surprises for Amy and Rory occur in this series of shorts, released online before Series 7 was broadcast. They’re fun, quirky, and set the scene for the Pond’s domestic harmony falling into tatters.

Asylum of the Daleks Prequel – the mysterious Darla von Karlsen lures the Doctor to Skaro. Released online by BBC America (to the chagrin of British fans) this is a great teaser for the main event (and of course, is misnamed: it’s a preface or prologue if anything).

The Making of The Gunslinger – voiced by Adrian Scarborough (Kahler Jex) this short extra provides a video guide to the cybernisation of the Gunslinger and is directed by Neill Gorton.

Meanwhile the limited edition (that’s the one with the Weeping Angels cover sleeve, and a poster, kids) also features a special extra.

The Science of Doctor Who – running to almost 45 minutes, this is the real special feature, including footage from the series to illustrate how science is used. Attempting to ground the show’s science to anything currently possible or under research, it’s an entertaining show featuring plenty of talking heads (including Steven Moffat).