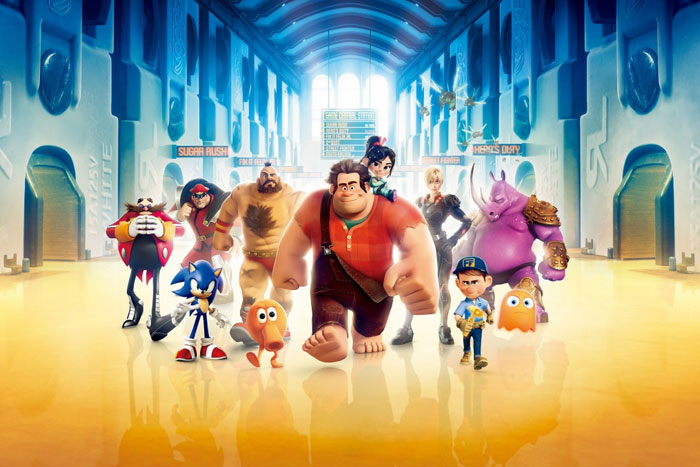 Thanks to Disney, we had the chance to see Rich Moore‘s Wreck-it Ralph at its Australian premiere. This is our review of the film – but as usual – no matter what we say, we recommend that you still go to your local cinema and see the film because: There is no better critic than yourself!

Wreck-it Ralph is the story of Ralph (John C. Reilly), a classic video game villain who is tired of being treated like a bad guy all the time so he decides to become a hero instead. Yet this quest, unbeknownst to him, could jeopardize his residential arcade and get in the way of ‘Sugar Rush’, a race game where he meets Vanellope (Sarah Silverman), a bug who lives as an outlaw and only dreams of winning the race at least once in her life.

Wreck-it Ralph is a very interesting film under the direction of Rich Moore that explores the world of video games, bringing to screen some old and new game characters, all the while delving into the true meaning of friendship and self discovery. There are strong and emotional moments between Ralph and Vanellope with quotes such as “if that little kid likes me, how bad can I be?”which lifts the film and touches every audience’s heart.

As expected, the animation is fantastic with vibrant colors and amazing textures matched by a perfect voice cast including John C. Reilly, Sarah Silverman, Jane Lynch and Alan Tudyk. Furthermore, the joy of this film stems from some random cameos and references to other video games like Street Fighter, Mario Bros, Halo and many more, making it seem a Where is Wally game where you try to spot as much game characters as possible. All is very well in the first half of the film but it goes downhill a little bit upon ‘Sugar Rush’ as all of a sudden, it is transformed into a kind of ‘Mario Kart meets Strawberry Shortcake’ movie, which may be a hit and miss for adults but for kids will surely love it.

There is no doubt Wreck-it Ralph will be another animated hit and a strong line-up against the fantastic Rise of the Guardians, making this Christmas full of cinematic wonders and fun adventures for the entire family which should be fully experienced in 3D.