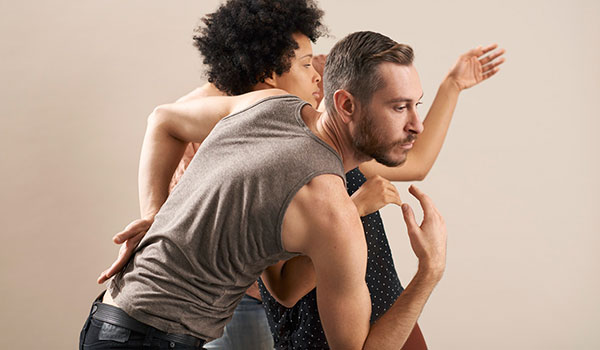 The Australian Centre for the Moving Image (ACMI) is proud to announce the world premiere of a new video installation by critically acclaimed Melbourne artist, David Rosetzky. Co-commissioned by ACMI and Carriageworks in Sydney, David Rosetzky: Gaps is a free exhibition in Gallery 2 from Tuesday 5 August 2014.

One of Australia’s finest video artists, Rosetzky’s captivating works have been exhibited widely throughout Australia and internationally. Gaps embodies Rosetzky’s ongoing exploration of personal identity and the relationship – or ‘gaps’ – between self and other through speech, movement and dance.

Drawing from material Rosetzky gathered conducting interviews with his cast, this new work is an oblique survey of the transition from rehearsal to performance, in both art and life. The artist’s process involved in-depth workshopping of the material with the performers, who come from acting and dance disciplines. Lake’s choreography, which integrates naturalistic and stylised movements, was also developed with input from the cast and Rosetzky during this rehearsal period. Long time collaborator David Franzke provides original music and sound design.

Commenting on the exhibition, Rosetzky said: “Working on Gaps with such a talented and diverse group of artists enabled me to explore a range of different performative modes to present the idea of identity and self-other relations as an interplay of shifting subject positions.”

ACMI Director, Tony Sweeney is thrilled to be offering Rosetzky a platform on which to expand his evolving and exciting artistic vision: “In Gaps,Rosetzky creates intense scenes that delve closely into notions of self and identity. The precisely choreographed performances seduce the audience into a world of disquiet and disconnection.”

The world premiere of Gaps at ACMI follows the first major survey of Rosetzky’s work, True Self at the Centre for Contemporary Photography in July 2013. In 2015, Carriageworks will include Gaps in 24 Frames Per Second – a program of new works exploring cross-disciplinary approaches to choreography, film and visual art.

The co-commission of Gaps by ACMI and Carriageworks has been assisted by the Australian Government through the Australian Council for the Arts, its arts funding and advisory body.


David Rosetzky: Gaps will be a free exhibition at ACMI from 5 August 2014 to 8 February 2015. For more information, please visit acmi.net.au.

*Image Courtesy of David Rosetzky and Sutton Gallery via. Acmi