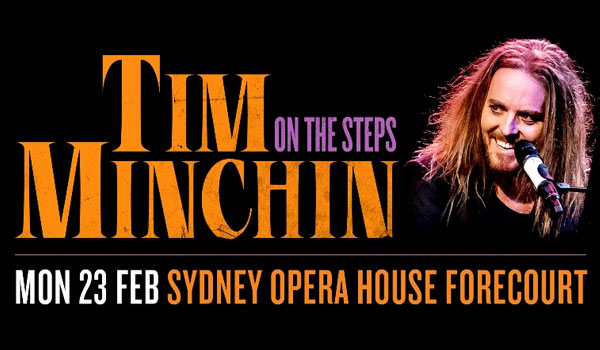 TIM MINCHIN, internationally renowned, award-winning Aussie comedian, actor, composer and big-haired-small-jeaned-rock-god will return this February for an exclusive one-night only performance – in his only Australian show scheduled for 2015 – ‘On The Steps’ at the Sydney Opera House Forecourt.

TIM MINCHIN is the second act to be announced as part of the inaugural week-long ‘On the Steps’ series of outdoor concerts, presented by the Opera House and Live Nation as part of the 2014-15 Summer at the House line-up.

The overwhelming response to internationally renowned, award-winning Aussie comedian, actor, composer TIM MINCHIN’s only Australian show in 2015, has seen him announce a second and FINAL show due to the phenomenal demand for tickets.

TIM MINCHIN will now perform TWO SHOWS ONLY ‘On The Steps’ at the Sydney Opera House Forecourt on Monday, February 23 and now also on Tuesday, February 24.   Tickets for this final show will go on sale at 10am this Friday, December 12.