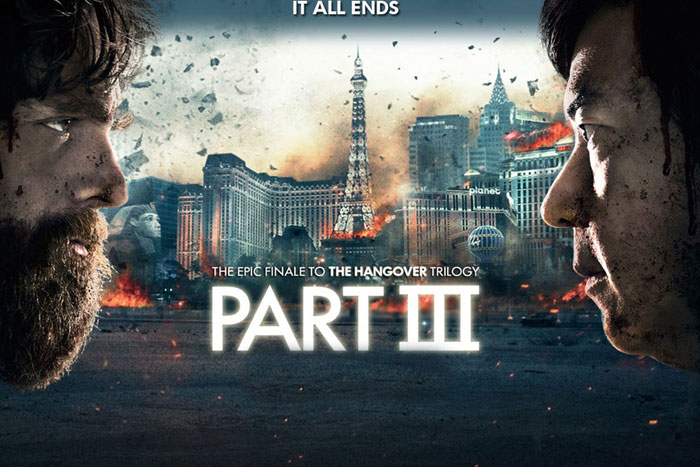 Thanks to Roadshow Films, we had the chance to see Todd Phillips’ The Hangover III before its Australian cinematic release. This is our review of the film; but, as usual, no matter what we say, we recommend that you still go to your local cinema and see the film because: There is no better critic than yourself!

The film follows The Wolfpack gang once again, with Phil (Bradley Cooper), Stu (Ed Helms), Alan (Zach Galifianakis) and Doug (Justin Bartha) hitting the road to take Alan to a medical retirement center as his childish behavior has been getting worse over the years. However, despite not being in a bachelor party or drinking together overseas, the gang gets in trouble once again. They are kidnapped by Marshall (John Goodman), a powerful criminal who is looking for Mr. Chow (Ken Jeong) who has escaped from his imprisonment in Bangkok. Marshall’s reasoning for using the Wolfpack to find Chow is because the criminal stole a huge amount of gold from him a while ago; and the only person who has been in contact with him is Alan, which comes as a major surprise to his mates.

With only 3 days to find Mr Chow in exchange for Doug’s life, the Wolfpack starts a new adventure that will take them from Tijuana to Vegas once again. The Hangover III marks the end of the comedy saga that started back in 2009 with huge success. 2011’s sequel, however, was unable to captivate audiences as much as the first film. The saga was apparently never intended to be a trilogy, something that resulted from fan pressure to keep exploring the concept. And the concept is almost totally abandoned in this third installment. The elements that made the franchise famous are absent: there is a lack of drinking stories and memory loss (in fact, there is no hangover at all). Additionally,  the excessive reliance on Alan’s silly jokes and Mr Chow’s repetitive sexual references leaves the rest of the gang in second place and without much time to shine on-screen. In fact, the movie resembles Phillips’ 2010 effort, Due Date, more than a Hangover sequel. Sadly for fans of the saga, since Due Date director Todd Phillips has just gotten darker, using desperate measures to try to make audiences laugh, such as decapitating a giraffe on-screen (as seen on the trailer) among another animals, and repeating the same kinds of jokes over and over (removing the element of surprise). The very poor script even leaves one of the best actors of the moment, Bradley Cooper, just playing a contemplative character with no funny moments during the film.

Zach Galifianakis’ role is perhaps the only positive aspect of the movie. The comedian’s unique style provides the film’s few laughs, especially in the scene where he meets Cassie (Melissa McCarthy) in Vegas. Galifianakis and McCarthy form a comedy duo that could work perfectly in future comedies.

At its best, The Hangover III could be categorised as a bad action film with silly jokes. We see villains escaping in parachutes, participating in car chases and making plans to break into hotels, just to name a few clichéd elements.

And not even the references to the previous films or the inclusion of Melissa McCarthy as the new celebrity cameo save the film from sinking. Overall, the final instalment in the Hangover saga is a totally forgettable film. Audiences are sure to agree that this was an idea that did not need more than one film to secure its place in cinematic and comedy history. And The Hangover III proves, once again, that Hollywood’s desperation to milk sequel and reboot cash cows so often results in eventually hitting rock bottom.