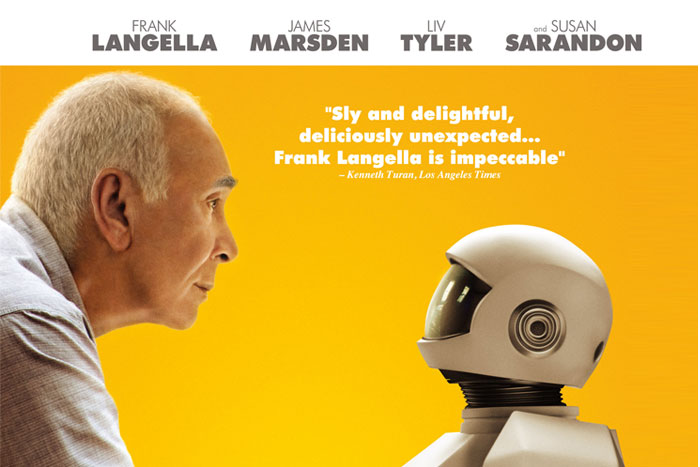 By Christina
Thanks to Sony Pictures Australia, we had the chance to see Jack Schreier’s Robot & Frank before its Australian cinematic release. This is our review of the film – but as usual – no matter what we say; we recommend that you still go to your local cinema and see the film because: There is no better critic than yourself!

Robot & Frank is a witty and endearing story about Frank (Frank Langella), an aging cat burglar with a faltering memory, who, under his son’s behest (James Marsden), must accept the help from a gleaming white machine, Robot (Peter Sarsgaard), or face being institutionalized. Frank is clearly unenthusiastic at first as Robot cramps Franks style with its insistence for Frank to eat healthy, stay active and have a clean house; but Frank soon warms to the idea of Robot when he discovers that Robot’s indifference to obeying the law, and his agile handy skills, make for the perfect accomplice in robbing a joint or two, bringing Frank back into the burglarizing business, breathing life back into him.

This is the first film for director Jack Schreier, working from a script by Christopher D. Ford that is not so much a heist film, but a film about life, offering a charming look at age, vulnerability and the non-permanent nature of memory and technologies. A story where a man can no longer mask his frailty and where a society can casually move away from the old and bring in the new. The latter of which is demonstrated by Jennifer’s (Susan Saradon) story, where she is the last remaining flesh and blood librarian who is not only faced with being replaced by a machine, but also witnesses the extinction of what we know a library to be. Set in the near future, in an age where things and people need to be of use, this film beautifully accepts natures brutal way of dealing with our demise and the inevitable changes we face in the way we live. This is essentially a film about what it means for people and things to fade away. With an all round marvelous cast, Langella performance is strong as he creates a believable and moving relationship with what is an object. Peter Sarsgaard as the voice of Robot and Rachael Ma as the body produce a convincing android with deceivingly humanoid characteristics. Whilst the support actors, Susan Saradon, James Marsden and Liv Tyler offer strength and development to the story.

This is a film has some wonderful comedic moments, but most of all, it has a lot of heart. It is a sweet, enjoyable and light. The story is subtle in its power and wonderful in creating intrigue. It is marvelously honest and one can really appreciate that a simple story is made so well.