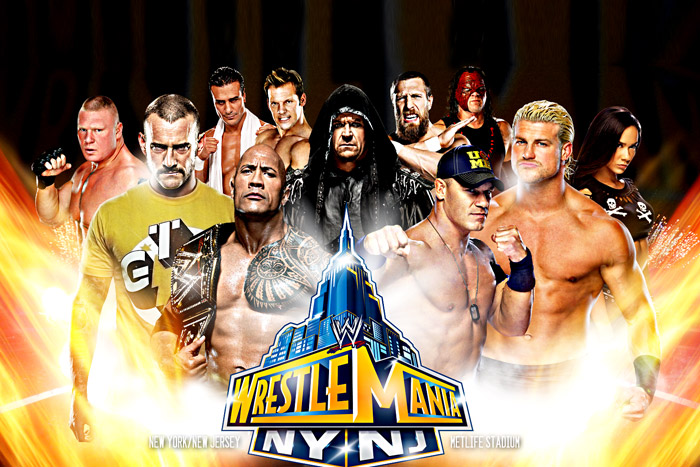 Thanks to Shock Entertainment we had the chance to revisit this year’s version of Wrestlemania, so far one of the best live events in the world on DVD.

Wrestlemania 2013 marks the 29th version of this action-packed event, an event that has changed a lot during the years, with new faces, spectacular live musical performances and the biggest wrestling superstars on Earth. It features the highly anticipated rematch between John Cena and The Rock as the main event of the night, following The Rock’s winning match last year which left Cena in a very dark place wanting “redemption”. The triple DVD includes the full show, dispensing with the annoying soap-opera antics seen in the matches prior to ultimate event, where the rivals spoke too much and overshadowed the action. Fortunately for fans, this time the words have vanished and the focus is now on the action in the ring. Matches go for around 20 minutes and include such highlights as the Six-Man Tag Team Match with Randy Orton, Sheamus and The Big Show against The Shield, Ryback Vs Mark Henry, the WWE Tag Team Championship match with the Daniel Bryan and Kane delivering a full show against Ziggler and Langston.

However, the highlight of Wrestlemania 29 is the last official match of the mighty Undertaker, who has never been defeated at Wrestlemania, and this time must face CM Punk in order to leave the arena with a flawless record of 21-0. The match is pure adrenaline, with CM Punk annoying the legendary Undertaker more than he should for a very negative result for him as the wrestling legend applied all his expertise to guarantee a dream retirement and avoid disappointing his fans. This is definitely a postcard that will remain forever in fans’ memories.

The World Heavyweight Champion is also included and, as usual, Alberto del Rio and Jack Swagger deliver a show full of stunts and some dirty-plays. The second disc includes the match between Triple H and Brock Lesnar, a key battle because, if the legendary former member of the DX loses, he must retire. Fortunately for him, his old mate Shawn Michaels was in his corner during the match, proving once again that “The Game” can still give more and is far from leave the WWE.

Obviously the longest and most anticipated match on the DVD is The Rock vs John Cena for the championship. Sadly, it is not one of the best matches of the night as it looks too much like pre-arranged choreography than a classic WWE match, and has a very predictable ending. However, it is amazing to see two generations in the ring again doing classic moves and “finishers”. Wrestlemania 29 on DVD also includes the live performances of Sean “Diddy” Combs and Living Colour, the post-show coverage and the memorable 2013 WWE Hall of Fame Induction Ceremony of Mick Foley. Furthermore, the third disc is fully dedicated to the Hall of Fame Induction ceremonies of WWE legends Trish Stratus, Booker T, Bob Backlund, Bruno Sammartino and die-hard fan and friend of the federation, Donald Trump. All of this makes this DVD release a complete pack for WWE fans of this new generation as well as old-school fans who want to see some legends still kicking ass in the ring.

Wrestlemania 29 is now available in Australia