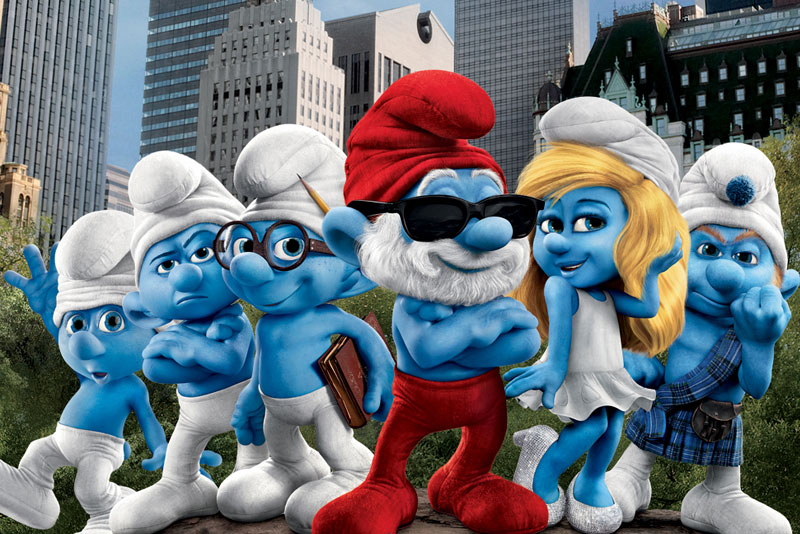 Thanks to Sony Pictures we had the chance to see Raja Gosnell’s  ‘The Smurfs’.  This is our review of the film – but as usual – no matter what we say; we recommend that you still go to your local cinema and see the film because: There is no better critic than yourself!!

The Smurf’s adaptation to the big screen tells the story of these tiny blue creatures “The Smurfs”, in their quest to defeat the evil sorcerer Gargamel played by Hank Azaria.

All was in harmony, until Gargamel and his cat Azrael discover the secret village where he trapped all the smurfs in order to extract their essence to become the most powerful sorcerer in the world. During their escape Clumsy, who always creates and gets into trouble, goes to the wrong way, making some of his friends go after him to save him. However, something magic happens and some of the smurfs escape through a vortex, because they were close to the “blue moon rising”, a celebration that only happens twice a month.  For their surprise, they are transported to New York, a new territory for them where they must figure out how to create a Blue Moon to be able to return to their own land. Unfortunately, Gargamel also follows them following his obsession to get the power he needs from the Smurfs.

While in New York, Clumpsy falls in a box which belongs to the new Marketing vice president of a corporation, Patrick Winslow (Neil Patrick Harris) who has only 2 days to finish a massive campaign in order to save his career and make his boss Odile (Sofia Vergara) happy. Winslow is married to Grace (Jayma Mays), forming a young couple about to become parents.

Obviously, Patrick and Grace get involved and got very close to the Smurfs. They decided to help them to come back home with more than an issue alongside their journey, that is,  Patrick learns about the real meaning of being a dad and the responsibilities that come with it, thanks to Papa Smurf’s advices.

The  Smurfs movie, as you might know, is based on characters created by Belgian artist Peyo Culliford back in the 50’s, and director Raja Gosnell takes the best out of the comics to transform them  into a featured film, taking care of every detail to avoid losing  the meaning of this beloved characters, making the film a great adaptation.

The film has every “smurf element” you want to see, while on the Smurfs Land you can see  beautiful works  recreating the village as close as the comic books and the cartoons. You can see many of the characters around; no matter if it is for a few seconds or minutes, you will recognize every smurf and their personalities, and with the great highlight that none of them has extra unnecessary details. For example Jokey Smurf has his classic gift boxes and they explode next to him, Baker has his hat and cakes around, etc.

The work in terms of CGI and 3D is fantastic. The expressions in all the characters are so appealing, that you only want to get a Smurf for you. Moreover, the cat Azrael also has some 3D animation in his face, making him so similar to the original cartoon that will make you laugh a lot. Moreover, the interaction between the real actors and 3D characters don’t crash at all making the film extremely enjoyable.

The story is simple and totally targeted for the little ones, and we have to admit that our inner kid came out during the film, taking us back to our childhood memories of watching the Smurfs cartoons, and that is the magic of this film. Add to this the sticky song, a classic from the smurfs that for sure you won’t stop singing after the end of the film, giving you a total sensation of happiness during and after the film.

The comedy of course is not absent in the film, and the script as simple as it is, works in a very clever way, using the smurfs word combination in normal quotes, but not abusing so much of it, thus  avoiding over use e.g. “for Smurf’s sake!”, “You smurfed with the wrong girl”, “”Smurf-xactly!””. Furthermore, Neil Patrick Harris’ character at one point blames them for saying “smurf” too many times, making it pretty hilarious.

One of the highlights of the film is Hank Azaria as Gargamel, the actor, famous for his voices in the Simpsons, totally nails his performance. It also helps that he has a great custom design and make up, making him look exactly as the original character. Every second with him on screen is a delightful trip to our childhood in front of the TV, wanting the smurfs to defeat the evil sorcerer. Add to that his great team work with Azrael making the villains duo a full pack.

The celebrity cast that did the voice, works in a great way as well, there was some concern regarding Katy Perry’s film debut, and we can tell you her voice as Smurfette is pretty good, even joking with one of her song quotes around, and it works!

The film also has a beautiful scene paying tribute to Peyo, but we won’t go into detail to avoid destroying the magic of it.

Maybe the only trouble of the film are secondary human characters, like Sofia Vergara, whose performance is  ok, but her role seems to be poorly developed  in order to give more time to the Smurfs on screen. Fortunately, Vergara’s role is just alright to link some things on the film, and doesn’t go beyond the necessary.

Another thing that could play against the film is that if you are not quite familiar with the Smurfs, you would not notice at 100% the effort and the love that the production put in the film in order to give you a full experience with all the elements that Peyo would love to have in a feature film.

Overall, The Smurfs was a great and pleasant surprise for us!  We loved the film; it has the magic that made famous the cartoons and the comics. It’s a film that will be adored by the entire family, especially the little ones. Moreover, the ones next to us at the screening were laughing the entire time.

The Smurfs movie has something special, something that we didn’t feel and see in a long time, and it is the happiness factor, because no matter what happened during the film, you came out happy, smiling and singing “la la la la la laaa…sing a happy song”, which is a “Smurfstastic “all ages experience!

So put your best blue clothes and go to your local cinema, because this movie is totally worth to see!