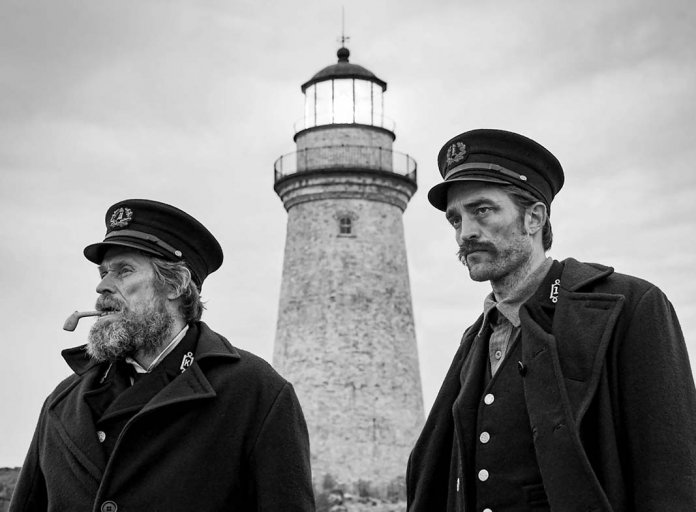 There are a lot of ten-dollar words one can use to accurately describe Robert Eggers’ latest, The Lighthouse, including “Sisyphean”, “grotesque”, “surreal”, “mythic”, “Promethean”, “fevered” and more besides, and clichéd phrases like “a descent into madness”. I could slip them into this review and you’d think “this is a movie that appeals to the sort of person who uses those sort of words” and so you might be put off seeing it. Don’t be. 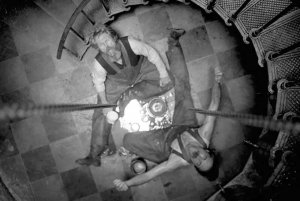 Robert Pattinson and Willem Dafoe play a pair of lighthouse keepers with dark pasts in charge of a lonely island in a forlorn sea. In charge, Willem Dafoe is a hard taskmaster and a cantankerous old bastard who drives Robert Pattinson‘s quiet assistant slowly crazy with something approaching psychological warfare. Both actors give go-for-broke performances that deserve awards, with Dafoe spitting out both invective and poetry like a champion, and Pattinson glowering and occasionally snapping with incredible intensity as he loses his mind in drink and despair.

Eggers’ technique exceeds even what he achieved with The Witch, with a narrow-framed, black-and-white picture, wonderfully bewildering sound design and a score that references nautical music in a satisfyingly diseased way.

If this all sounds like a pretentious, art movie endurance test; it isn’t. Although the movie recalls Symbolist art and is lovingly crammed with references to Greek mythology, classic literature and even HP Lovecraft, it’s claustrophobic, scatological, enthralling and utterly bonkers all the way through. It’s also very, very funny. Is it a horror? Is it a comedy? Is it a Lynchian freakout? Yes!

We are giving The Lighthouse the highest recommendation and, even if it sounds like it isn’t your sort of film, you should give it a try. It’s fun.