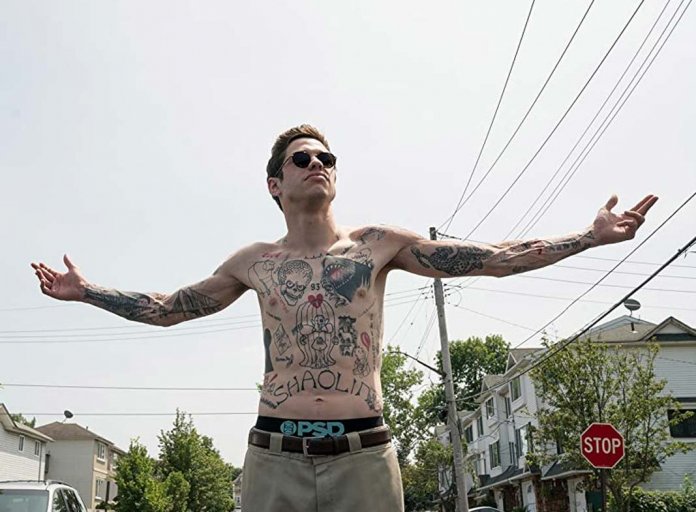 Scott, 24, lives with his widowed mother Margie (Marisa Tomei) and sister Claire (Maude Apatow). A highschool dropout, he dreams of opening a tattoo restaurant, but is a terrible tattoo artist and spends all of his time smoking grass and playing video games with his friends while avoiding commitment to his girlfriend Kelsey (Bel Powley). When he commits a truly stupid, outrageous – but hilarious – act upon a child, the boy’s enraged father Ray (Bill Burr) finds his way to their house and the story begins. 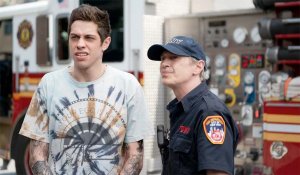 Typical of Apatow films, The King of Staten Island is a leisurely paced, almost formless affair that’s elevated by its hilarious dialogue and comic performances. Everyone in the cast puts on a great show here; even the broader comic relief characters feel real. The film is not without its flaws and, as usual for Apatow, is probably too long for its own good. Scott is a genuine disaster of a person, but Davidson‘s performance is so likeable, and the gentleness and patience of his exasperated family make you hope he’ll get things together. Even Bill Burr‘s trademark abrasiveness is tempered by genuine warmth as Ray attempts to drag Scott toward some sort of adulthood.

This isn’t really new ground for Apatow and his many movies about emotionally-stunted manchildren, but it does feel like a genuine attempt to really understand someone who has problems rather than just start formulaically at a low point for the sake of a conventional character arc. Its affection for all its characters even extends to an affection for its location, seeing the heart of a place that’s usually the butt of New Yorkers’ jokes.

The King of Staten Island is an affable sort of film. It’s got a definite melancholia to it but it’s very funny and thoroughly humanistic and kind to its characters. Yes, it’s a little overlong, but it’s certainly never anything less than entertaining.