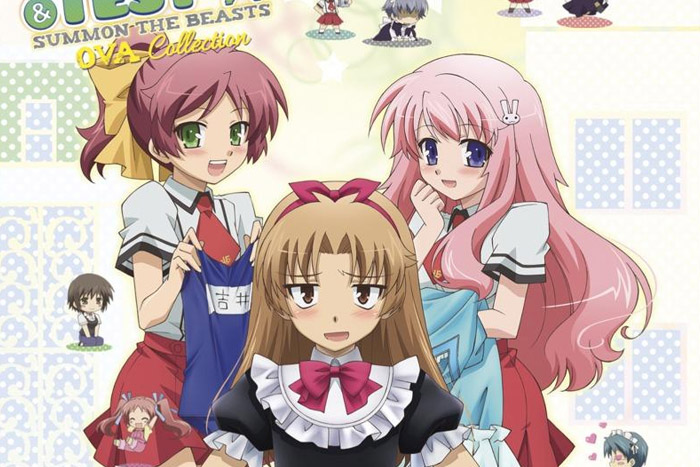 Thanks to Madman we had the chance to see Baka & Test – Summon The Beasts Ova Collection in Blu-Ray, an animation based on the novel by Kenji Inoue.

Class F is back in these two new episodes (OVAS) set between seasons 1 and 2 (insert review of season 2).

In a school full of challenges, where classes are divided by grades and where the best facilities are for the best students, our bakas (idiots) from Class F are back, doing their best to prepare their class for the School Cultural Festival.

They decide to run a Chinese ‘European’ café with the aim of making sufficient profits to afford decent desks for their class, and so that their classmate, Mizuki (a Class A student who was mistakenly put into Class F) can stay in school. His father is threatening to change schools due to the lack of facilities that might affect Himeji’s good grades.

Mizuki, Minami and Hideyoshi (the pretty guy, usually mistaken for a girl) are the waitresses, while Yoshii, Yuuji and Mussolini take care of the cooking. Everything seems to go well until the Tonkonatsu pair from Class A starts a rumor to scare customers, something that Yoshi and Yuuji will defend till the end, even dressing Yoshi as a maid to get their revenge.

At the end the café makes enough profit to improve the facilities, but to be allowed by the school, they must win a Summoning contest, which is how the next OVA begins.

Class F is forced to fight in a Summoning tournament with the entire school, but somehow uses tricks and cheats to win most of the battles. Yuuji begins to suspect how they arch-rivals, the Tonkonatsu duo get to win so easily, finding out that duo has fixed the battles to have the last battle with them at the last stage of the tournament. Yuuji and his friends won’t stop until win to save Mizuki from leaving the school. The two OVAs of Baka & Test  are unsurprisingly funny and the fight with the cute avatars seems to go to the next level with a better combat technique. on the tournament scenarios. Even though the battles are not very long and mostly show little gags with the ‘Chibi’ version of the students (a super-deformed version), they are still great – ridiculously funny and wacky at the same time. There is a lot of fan service between the girls and Yoshi, and heaps between Yoshi and Hideyoshi (involving Mussolini’s erotic photos) in this couple of episodes. They also show Kobo’s man crush (Yoshi) in a funny way. However, there is one missing character here: Minami’s little ‘fan’.

The animation of this series is fantastic as usual: bright and colorful, fast-paced images and with lots of details to emphasise serious situations.It perfectly combines the super-deformed versions with high-quality images, especially in the Blu-ray release.

The voices fit the characters well, especially in the Japanese version; however, the English dubbing is also good. The songs in the opening and closing scenes are new, full of energy and super catchy, especially the closing song. Overall, Baka & Test – Summon The Beasts Ova Collection follows the same formula of the series, something that isn’t bad, as the series is good fun.

Madman brings this great series to Australia in DVD and Blu-ray, available for sale. Get your copy here