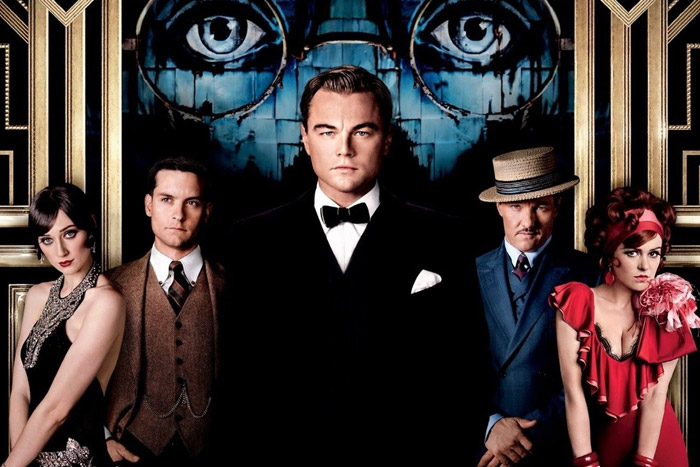 By R.Best
Thanks to Roadshow Films, we had the chance to see Baz Luhrmann‘s THE GREAT GATSBY before its Australian cinematic release. This is our review of the film; but, as usual, no matter what we say, we recommend that you still go to your local cinema and see the film because: There is no better critic than yourself! The highly anticipated film, based on a classic F. Scott Fitzgerald book will finally hit cinemas throughout Australia this Thursday. Directed by legendary Baz Luhrmann, produced and designed by the visionary Catharine Martin, a cast consisting of Leonardo DiCapro, Tobey McGuire, Carey Mulligan and Australia’s own Isla Fisher, and Joel Edgerton with a soundtrack composed by Jay-Z featuring vocal powerhouses Beyonce, Lana Del Rey and Florence Welch. It is evident that the film had all the ingredients for a recipe of success.

The visually captivating film is set in 1920s Long Island, New York following the World War. Told from the perspective of Nick Carraway (Tobey McGuire) the movie is a reflection of Carraway’s experiences as he discovers and becomes acquaintances with the mysterious allure that is Jay Gatsby (Leonardo DiCaprio).

The beginning of the film is a development of the mystery and complexities surrounding Gatsby. Was he an ‘Oxford Guy’? A German spy? Did he kill a man? Carraway was intrigued by the luxurious life that this enigmatic man led, and was curious about the story behind the invisible yet intriguing presence about this man.

The introduction of Jay Gatsby in the movie was monumental, introduces against a backdrop of fireworks and blaring music from party after party were being held in his name, with what seemed like the whole city of New York present in honour for this man that nobody knew, expect only a few. The parties that were held were grandiose oozing of vibrant people who drank and danced the night away without a care in the world. As we begin to delve into the world of the Great Jay Gatsby, we learn the motives behind these lavish parties.

As the friendship between Carraway and Gatsby develops, Carraway finds out the real reason for the only invite in the city for his party, and the real reason Gatsby’s façade and the object of his passion, Carraway’s beautiful cousin, Daisy (Carey Mulligan).

Like Moulin Rouge and Romeo and Juliet, this film includes Baz Luhrmann’s signature style, a blend of classic with contemporary; it combined elements of a tragic story, romance and was awe-inspiring. Visually, the 3D effects in this movie were mesmerizing, at times overdone. Regardless, from the very start the audience was spellbound and almost hypnotized as though we were taken back to that time. The costumes were as grand as the mansions in which they lived. However, while all of these components feel perfectly in place, personally, the let down in this movie was in the soundtrack. While there was a large amount of publicity surrounding the highly anticipated soundtrack composed by Jay-Z, it fell short from being as grand and illustrious as the rest of the film. Jay-Z made some audacious bold decisions, will attempting to stay true to the jazz influence of that time, were unfortunate. It was contradictory to the energy and complexion that Luhrmann was trying to create throughout the movie.

While it was a spectacular and extravagant movie based on the classic, unlike Moulin Rouge and Romeo and Juliet, it’s sheer size was not enough to ensure that this movie will be a classic for years to come.