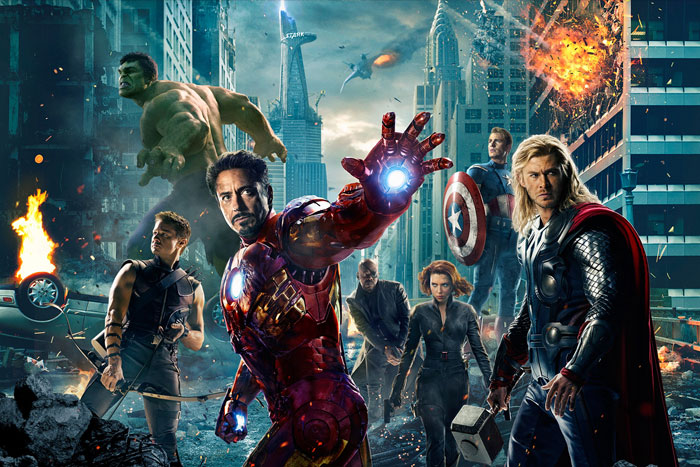 Thanks to Disney and to The Avenger’s Australia/NZ facebook page we were lucky enough to score a spot in the very early screening held in Sydney for one of the most anticipated blockbusters of the year: Joss Whedon‘s The Avengers.This is our review of the film – but as usual – no matter what we say; we recommend that you still go to your local cinema and see the film because: There is no better critic than yourself!

The Avengers is the story of the ultimate team of superheroes, including Iron Man (Robert Downey Jr.), Thor (Chris Hemsworth), Captain America (Chris Evans), The Hulk (Mark Ruffalo), Hawkeye (Jeremy Renner) and Black Widow (Scarlett Johansson) all under the command of S.H.I.E.L.D.’s Nick Fury (Samuel L. Jackson) called to save the Earth from the menace of Thor’s brother Loki (Tom Hiddleston) and his galactic army…Do we need to say more about the plot?…We don`t think so as we will try to leave this review spoiler free!

The Marvel franchise already gave us huge blockbusters on screen such as Iron Man 1 and 2, Captain America: The First Avenger, Thor and The Incredible Hulk, with all of them leading up to this film as the perfect continuation of all those  individual stories. Director and writer Joss Whedon  (famous for his works on TV shows like Buffy the Vampire Slayer, Angel and Firefly), had the very hard task of taking all these characters and put them in one feature film, which he totally nails in delivering one of the best super hero movies of all time. With such attention to the characters and storyline, this will surely make every Marvel comic fan (or everyone else!) who dreams of the ultimate hero movie, full of joy.

Whedon absolutely understood The Avengers concept which you can immediately see after the movie starts because with only a few minutes into the film, all the audience were glued to their seats to watch the story unfold. Every Marvel character is presented one by one in a very clever way, proving that Mr. Whedon was the perfect man behind the camera.

Speaking of stars on the screen, all of them had a chance to shine with equal parts or length for everyone. Moreover, villain Loki (Tom Hiddleston) is probably one of the best we’ve seen, doing an even better job than in Thor with his ironic smile and crazy eyes blazing fire. As for Thor (Australia’s Chris Hemsworth), the God of Thunder looks mightier than in his own film and does more “comic book” style movements, stepping in front of his partners if necessary to make him seem unstoppable

Captain America’s (Chris Evans) story in The Avengers pretty much follows up on how The First Avenger movie finished, with Steve Rogers stuck in the modern world, not quite understands his environment but waits for a new assignment to be back in action and serve his country. Even though it was stated that Whedon‘s version of The Avengers will be from Captain America’s point of view, it is done very subtly, to not leave all the other characters aside. Furthermore, we might even say that Captain America is not the major character in this film, as every single Hero is a star in his own right in this almost 2 hour blockbuster.

Tony Stark/Iron man (Robert Downey Jr.) is also back proving that he is still the egocentric playboy that the world and his assistant Pepper Potts (Gwyneth Paltrow) knows, greeting his diehard fans in a Black Sabbat shirt throughout the film (as seen in the trailers) going back to the circle on his armor’s chest.

Black Widow (Scarlett Johansson) shows in this film why she attained that nickname who interacts perfectly with the rest of the team as the bad ass spy. Hawkeye (Jeremy Renner), briefly introduced in Kenneth Branagh’s Thor, does justice to his name by delivering some very cool action scenes with his bow and arrows.

Now despite all the classic characters, the attention was on Mark Ruffalo’s interpretation of Bruce Banner/The Hulk, because this was his first role in the Marvel franchise and becoming the third actor to play Bruce Banner in the films (After Eric Bana and Edward Norton), and let us tell you, Ruffalo does the best Dr. Banner personification so far (even if you are a die-hard Edward Norton’s version fan) candid, smart and bad ass when the ‘other guy’ needs to come on to kick some ass. Not to mention, the CGI Hulk looks beyond amazing, as well as the entire film (we`ll get to that later), with every texture and move-ment looking like as if he was a comic book in motion. So in case you are wondering…the answer is: Yes! “HULK SMASH” (Insert Fans Tears here)

Obviously, Nick Fury (Samuel L.Jackson) is back alongside his sidekick Agent Phil Coulson (Clark Gregg) but this time they are not alone as they are joined by the iconic S.H.I.E.L.D member Maria Hill (Cobie Smulders), all working as a team despite their differences, delivering the essence of what S.H.I.E.L.D is.

In regards to the action and special effects, we were thrown with every single element on-screen as there were too much going on, what of the latest state of the art technology pushing their limits, including explosions everywhere, alien attacks, epic fights and iconic comic book quotes. Plus the classic Marvel comedy, not overly exploited, as you won`t see unnecessary characters as most of the funny moments stems from Tony Stark’s ironic comments and Agent Phil Coulson as usual.

The music score was well put together by the great Alan Silvestri, reminding us of his past work in Predator; there is also the theme song by Soundgarden Live To Rise to add a bit of good grunge rock to a film full of energy. Oh and how can we forget, our beloved ACDC’s Shoot To Thrill is back as well thanks to Iron Man in a couple of scenes.

Therefore of all the things we mentioned, they make The Avengers a visual spectacle, totally action packed and a dream come true for fans of the super hero genre, especially Marvel fans who will be addicted to it like us, because it`s just perfect and will make you want to watch it again and again and applaud non-stop. Oh and sorry folks, there is a Spoiler Alert after all – “something Marvellous happens” in the middle of the end of the credits, so don`t leave the cinema immediately. A MUST SEE FILM!

Thanks Mr.Whedon for giving us The Avengers movie that every fan would want to see!

The Avengers  will Assemble on screen in Australia on April 25, 2012