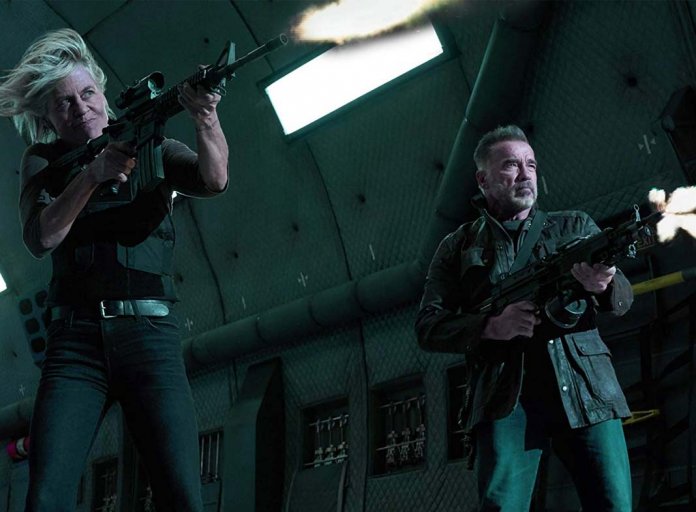 After the colossal mess that was Terminator Genisys, the Terminator franchise seemed to be condemned to be terminated for good. However, in a push to revive the saga, the studio hired Deadpool director Tim Miller to team-up with James Cameron to deliver a direct sequel to the spectacular T2: Judgment Day (1991), by dismissing all the sequels including Salvation, Rise of the Machines and Genisys. 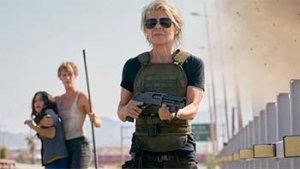 Despite averting Judgement Day, mankind is still in jeopardy, as explained by an “augmented” human named Grace (Mackenzie Davis) sent from the future to protect automotive plant worker Daniela Ramos (Natalia Reyes), targeted by the improved android assassin Rev9 (Gabriel Luna). When Grace and Dani are rescued by the legendary fugitive Sarah Connor (Linda Hamilton), a series of events is initiated that could change the future and the chances of survival for the entire human race.

Dark Fate welcomes back Linda Hamilton, reprising her role as Sarah Connor and the inimitable Arnold Schwarzenegger as the iconic Terminator, who once again steals the spotlight with his unique “charisma” and ability to take on extreme action sequences. However, it’s Linda Hamilton who carries weight of the film, every scene with her is pure nostalgia and badassery and seeing her sharing the screen with Arnold once again is a dream come true for fans. 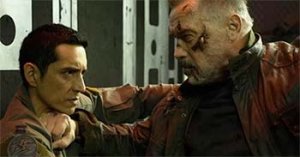 The film is packed with action sequences, something director Tim Miller carries out flawlessly, with car chases and even a Deadpool-type sequence involving the Rev9 using its arms like swords while trying to kill Daniela inside a detention center. Mackenzie Davis‘ Grace on the other hand is a good addition to the story and brings spectacular action scenes to the plate, as well as good dramatic twists.

Thankfully, the film goes in the right direction, but the character of Daniela lacks the charm needed, is underdeveloped and feels shoehorned into the story. Moreover, Dark Fate dares to alter the myth of John Connor again, by shaking things up from the very beginning, probably to open the door to a new franchise, something that might get many die-hard fans quite angry.

Overall, Dark Fate is a good follow-up to Judgment Day, but far from being as good as the first two films. It has some nice moments full of nostalgia, mind-blowing action sequences and a soundtrack that uses bits of the iconic “Terminator 2” theme song flawlessly. It could be a good ending to the saga or the beginning of a brand new series as the possibilities of playing with the timeline are limitless.