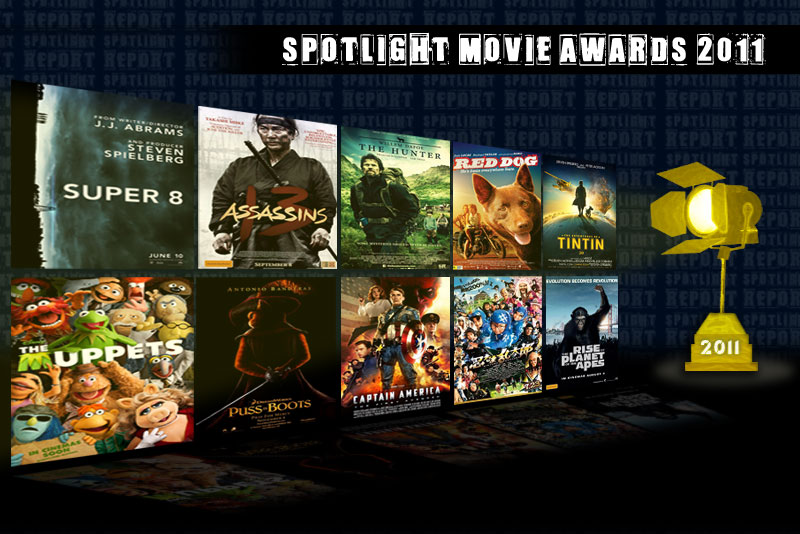 This year is almost gone and we had the chance to see tons of films for all tastes (with some major deceptions as well). This is our very first Spotlight Movie Awards, where after much thoughts, we have selected what was for us The Best of 2011.

Definitely ‘the hit’ we expected, full of Spielberg and Abrams magic, that even gave us the chance to sit down with JJ. Abrams himself for a chat and see our site featured on TV and newspapers with quotes from our movie review like “A Perfect Job, one of the best movies of the year”.

This film marks a comeback to the sci-fi origins, a kind of modern E.T. story telling mixing the unique style of two of the best movie directors in our modern times, with a very talented young and unknown cast, excellent soundtrack by Michael Giacchino and a beautiful timeless story that doesn’t need 3D to blow our mind.

Coming from one of the best directors in the Japanese culture, once again Takashi Miike showed us that when he is in his environment and has the freedom to do what he does best, he can deliver fantastic results with great cast, smooth storytelling, fabulous special effects (without an over abuse of CGI, including one of the biggest, longest and most incredible Samurai battles we`ve ever seen on-screen) A master class for many film directors!

Even though the film has a delayed release in Australia, we decided to included it on the list as one of the best movie of the year, because The Muppets made a fantastic come back to the big screen, full of music, comedy and keeping their essence at 100%, giving the viewers pure joy and laughter for the entirety of the film.

With a simple storyline and amazing soundtrack, The Muppets proved that you can do great films with classic elements, transporting many of us to our childhood and making us leave the cinema with a big smile on our face.

4) RISE OF THE PLANET OF THE APES

Everyone thought that this movie was a major risk and a potential failure but director Rupert Wyatt proved us wrong with a strong film that left us wanting a sequel, thanks to a fantastic screenplay by Rick Jaffa and Amanda Silver and to perhaps the most impressive special effects team that the cinema has seen in recent years, courtesy of the always amazing Weta Digital (Lord of The Rings, Avatar etc). Moreover, this film ignited debate for Oscar nominations as the world-class performance by Andy Serkis as Caesar stirs more emotions with his motion capture than any other actor for a long time.

Proudly Australian made, the adventures of “Red Dog” charmed viewers around the country and overseas, making the film one of the biggest Australian blockbusters in the box office, breaking tons of records and earning IF awards recognition.

Full of emotions from a great cast including the canine protagonist the Red Dog who took us on a journey to some unexplored areas of this country in telling us this true blue story.

It is not often to have a super hero movie in the Top 10 of the year but this time Marvel surprised us with the story of Steve Rogers, better known as Captain America in a film that we could say is the best from Marvel so far.

With a flawless performance from Chris Evans who was a very risky selection for the role (because of his past performance as Johnny Storm in the Fantastic Four films) plus a great cast including Hugo Weaving and Stanley Tucci, this film traced back to the beginning of the Marvel comics by bringing The First Avenger to the big screen, paving a great way for the Avengers film franchise to come as part of a Marvel saga.

Takashi Miike takes another spot in the Top 10, thanks to his comedy Ninja Kids which we had the chance to see at the 15th Japanese Film Festival.

Miike brought the adaptation of the popular manga and TV show Rakudai Ninja Rantarō (Failure Ninja Rantaro) to the big screen in a total anime style, not using unnecessary CGI and 3D effects at all. With cute and funny young actors that resembles the characters from the cartoons, including classic elements from the series such as giant plum-sized bumps and cartoony villains, it makes the film a great comedy, especially for anime lovers who won’t be able to stop laughing throughout the whole film.

No.8 on the list has boots! As a spin-off from the Shrek Franchise, ‘Puss in Boots’ was a great surprise for everyone, dismissing all the stigmas and issues from the very average “Shrek The Third”. ‘Puss in Boots’ gave the worldwide audience an hour and a half of great laughter and mind-blowing animation, using a fairly simple story and perfect voice cast led by Antonio Banderas and Salma Hayek. This film shows 100% of how a good spin-off should be, possibly bringing a dawn of new and enjoyable franchise for everyone at home.

In a world full of big Popcorn blockbusters, non-stop actions and 3D effects for even comedies, it is great to finally find something different to watch and this Australian story directed by Daniel Nettheim is one of those films that you will remember for the storyline – based on true events surrounding the extinction of the Tasmanian Tiger and the urban legends which believes that there are still some left alive in this great continent.

The film was not only shot entirely in Tasmania, it also had the honour of recruiting world-class talent like Willem Dafoe, who as usual, gave marvelous performance alongside a great cast that includes Sam Neil and Frances O’Connor, making the film an ultimate Aussie adventures and a red alert in terms of ecological awareness.

10) THE ADVENTURES OF TINTIN

The film may not have a WOW factor all the time but Steven Spielberg and Peter Jackson definitely know how to take special effects to the next level to create a beautiful film. In this case, a fantastic comic franchise is transformed into a stunning live action movie using motion capture technology and a wonderful voice cast including the ever great Andy Serkis, Daniel Craig, Nick Frost, Simon Pegg and Jamie Bell.

A film that is visually flawless with a great music score by the amazing John Williams.

Bridesmaids
Perhaps THE comedy of the year, it is a great surprise even defeating the highly anticipated Hangover II with a fresh cast that shows us that a good script can provoke tons of laughter.


X-men: First Class
After the disappointing X-men: The last stand and X-men Origins: Wolverine, director Matthew Vaughn alongside Bryan Singer delivered a great come back to the X-Men franchise using many classic elements for a prequel that is addictive to watch with amazing special effects and fantastic cast including James McAvoy and Michael Fassbender.

Harry Potter and the Deathly Hallows Part 2
The ending that all the Harry Potter fans wanted became real, the perfect final film for a saga full of magic that created a full generation of fans, with amazing especial effects, huge emotional scenes and great performances from the entire cast.


The Smurfs
Yep, because we are our own critics we dismissed what the international film critics said about the movie and give The Smurfs an honorable mention as the film was simple, sweet, enjoyable and well done with great CGI designs, keeping the characters as true as possible to the original cartoons, including a fantastic Hank Azaria as Gargamel in a movie that made us leave the cinema “singing a happy song”

Real Steel
At the beginning of this film, it looked like a copycat of Rocky with robots or transformers but it impressed us with a great storyline, amazing especial effects and an always fantastic Hugh Jackman in one of his best performances, making us anticipating a sequel soon!

Mission Impossible: Ghost Protocol
The story may not be the most original, but seeing director Brad Bird whose background was an animator taking over the franchise with the Bad Robot team as a backup, we were delivered one of the best action blockbuster of the year, especially in the Imax technology that maximized one of the most dangerous stunts ever done by an actor (Tom Cruise).

So as you can see, with all these hits in 2011, we cannot wait so see what 2012 will bring…with anticipated films centering on super heroes like The Dark Knight Rises, The Avengers, The Amazing Spiderman, some comebacks like Ridley Scott in Prometheus, and some new franchises with great potential like The Hunger Games. We are ready for it!