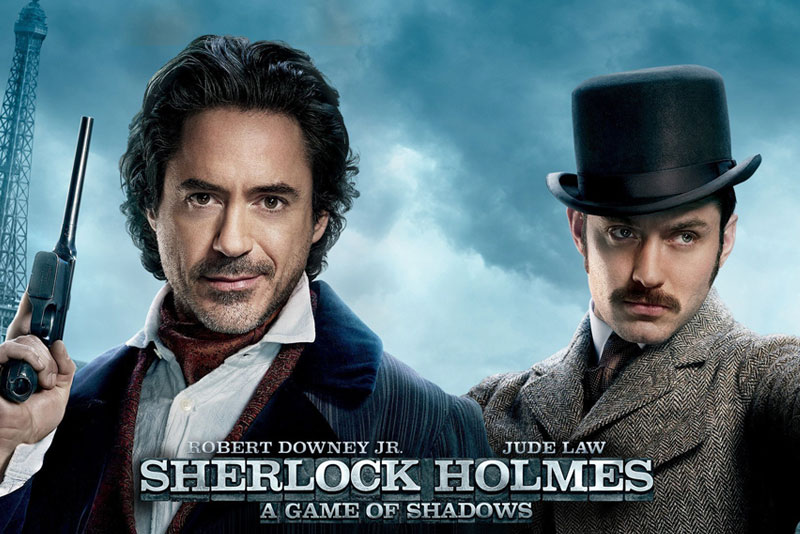 Thanks to Roadshow films, we had the chance to see Guy Ritchie’s Sherlock Holmes: A Game of Shadows before its Australian cinematic release. This is our review of the film – but as usual – no matter what we say; we recommend that you still go to your local cinema and see the film because: There is no better critic than yourself!

Sherlock Holmes: A Game of Shadows marks the return of Robert Downey Jr. and Jude Law in the roles of Sherlock Holmes and Dr.Watson (who is about to get married) for on a new adventure. Following on from the last movie (if you haven`t seen it yet, don’t read the next 2 lines as it might be a spoiler) it hints that the mysterious Professor Moriarty (Jared Harris) is a major suspect of bombings in this sequel. Through their new adventure, Holmes rescues a gypsy, Madam Simza Heron (Noomi Rapace) who is actually the sister of a man in Moriarty’s plot to unleash chaos.

This second Sherlock Holmes movie is in exactly the same style as the first one with a modern twist at the most famous detective in the world, using a lot of comedy and actions, especially thanks to Robert Downey Jr. in some spectacular sequences.

Unfortunately this sequel has some identifiable flaws such as the abuse of Ritchie`s classic slow motion technique in order to make the action sequences mind-blowing, which after over doing it, can wear out the audience. Moreover and perhaps the major issue of the movie is the nemesis, Professor Moriarty, who is mean to be Holmes biggest nemesis yet doesn`t come across it at all. This is not because Jared Harris performed poorly but the attitude and development given to the character is very passive and unimpressionable (he doesn`t look evil at all!), making the viewers having to assume that he is actually a brilliant and nasty mastermind.

In addition, the execution of the story, especially in emotional scenes where important lives are lost, leaves little effect as if nothing happened – a clear example of this is Madam Simza’s and her brother’s background  which is highly inarticulate and under developed throughout the movie.

Nevertheless, despite the flaws, the film is a fun adventure to watch, with great job in art direction and costume design, giving us a ‘hip’ version of the Victorian society with contemporary touches.

The action sequences are fantastic and full of adrenaline, so is Holmes’ ability to solve mysteries remaining the highlight of the movie. With twists on a plot you would not expect, audience becomes a part of the story by trying to decrypt some of the clues present throughout the film.

Furthermore, Downey Jr. and Law has great chemistry on-screen, inspiring great performances in a rollercoaster of emotions that changes from one scene to another, not to mention some hilarious comedy scenes which makes the film enjoyable and easy going to watch for all ages.

Sherlock Holmes: A Game of Shadows will hit Australian cinemas next January 5, 2012