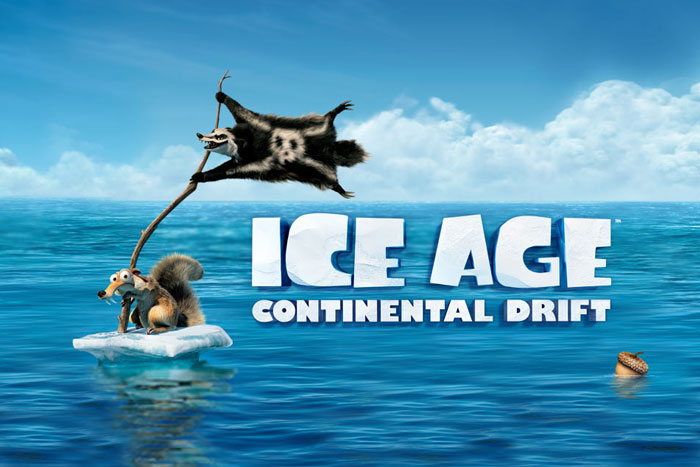 Thanks to 20th Century Fox Australia, we had the chance to see Blue Sky Studios’ Ice Age: Continental Drift before its Australian cinematic release. This is our review of the film – but as usual – no matter what we say; we recommend that you still go to your local cinema and see the film because: There is no better critic than yourself! Ice Age: Continental Drift is the fourth installment in the Ice Age saga which started in 2002, becoming an instant hit. In this movie, Manny (Ray Romano), Diego (Denis Leary) and Sid (John Leguizamo) must face a new adventure when a continental cataclysm sends them to the open sea and separates them from their friends and families. In their quest, the trio explores a brand new world and got into a battle with pirates to use an iceberg as a ship finding a way back to their love ones. All these new characters are visually attractive, extremely well designed and animated. But in terms of story-telling, it is a bit messy with unnecessary and under developed sub plots which is probably the biggest let down of the film, especially the story between Peaches and Manny involving “daddy issues” and teenage dramas, as she wants to impress a cool young mammut, not listening to her dad, making it all very predictable.

The Pirates is also a weird twist as it’s very random to have such villains in a prehistoric tale, as if the writers are running out of ideas, not even taking into account actual historical references which we were used to in the previous Ice age films. Plus we don’t see many prehistoric animals this time but a kangaroo, a bunny, a monkey and an elephant seal?!

Sid Granny’s (Wanda Sykes) is perhaps the most annoying character in the film, grumpy and not respecting any authority with an imaginary pet. Her time on screen is just to remind us that such character exists – hardly an asset for the film at all until the end.

Despite all these issues, the film is still enjoyable for kids and adults, especially the classic Ice Age soft comedy, courtesy of Sid and the beloved Scrat (his side stories are always a highlight in every film, getting into the most outrageous situations to find his precious nuts and this is no exception at all in this film either)

In terms of 3D, as we have always said, animation are perhaps the best choice for such experience as Blue Sky studios work on Ice Age 4 is better than ever with characters going off the screen to make movie watching more interactive for everyone, especially little kids.

Overall, Ice Age: Continental Drift is another Ice Age film which will do very well at the box office and the merchandise from the film are perfect gifts for the kids. We really enjoyed it but we still believe it’s not the best film in the saga (nevertheless amazed at the marvelous animation which works perfectly with 3D).

P.S. There is a short film from a beloved “yellow family” which will entertain and make you think a lot as it includes a very strong and innocent message.