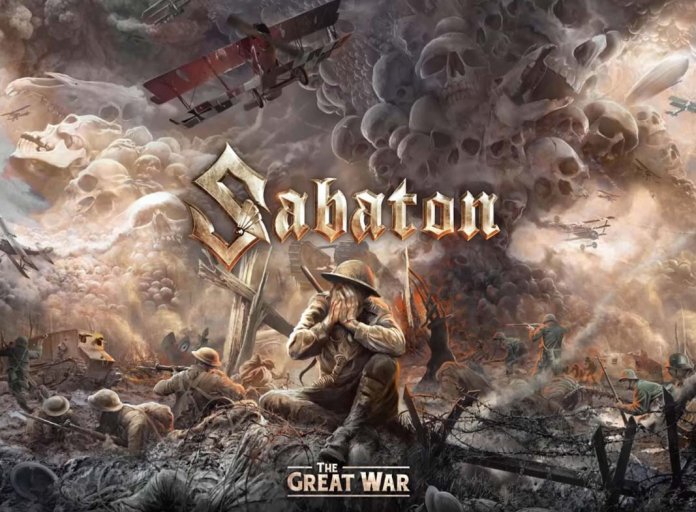 Sabaton approach their twentieth anniversary the only way they know how: by telling stories of hope, heroism and tragedy set to their highly unique and utterly addictive brand of theatrical heavy metal. With their special brand of show-stopping tracks reminiscent of the eighties, Sabaton have done it again! Set against the backdrop of the horrors of World War One comes Sabaton’s ninth studio album The Great War.

The Great War is atmospheric. The stories are powered by Joakim’s vocals and their unbeatable riffs and dramatically conjure images of dying soldiers and bloody battles. It is a dark look at a dark time in history. The emotion, the history and music combine to tell eleven powerful stories that come together as one. And the History Version comes with spoken intros for each song, giving you a thrilling recap of the events leading to the moment each song kicks off. With its horrifying and often harrowing intros setting the scene for what is to come, the History Edition leaves you feeling as if you have survived the battlefield. The album perfectly blends the brutal with the adventurous and makes sure you’re having fun the whole time!

The atmospheric album kicks off with The Future of Warfare a song which paints the picture of modern conflicts and begins the epic. With its brutal and dark sound, it serves as a reminder of the destructive nature of war throughout history. Without a moment to breathe, the album launches into the second killer track, The Seven Pillars of Wisdom, named after the autobiographical work of famous historical military strategist Lawrence of Arabia. With a more upbeat sound than its predecessor, Seven Pillars is history and metal at its most thrilling.

The Fields of Verdun paints a picture of the longest battle of World War One. This song is perhaps one of the album’s best and was evidently chosen as first single because of its depth, battle-imagery and fierce guitar-work. It highlights the devastation both musically and lyrically, making death seem inevitable: Fields of Verdun/ and the battle has begun/ Nowhere to run/ father and son/Fall one by one under the gun. The Penultimate track, The End of the War to End all Wars is the story of a survivor looking back at the past four years, and ultimately reminds us that despite what was promised, WWI was not the war to end all wars. The final, choir-led track In Flander’s Fields, is both beautiful and heartbreaking and leaves you understanding of the scale and tragedy of WWI.

Despite the heavy theme, the album is not all doom and gloom, with tales of heroism and survival outweighing those of death and despair.With twenty years of metal behind them, Sabaton really know what they are doing! The Great War is the perfect blend of history and metal, and is possibly Sabaton’s greatest album so far!

Donʼt miss out on The Great War – available worldwide on July 19th through Nuclear Blast Records.