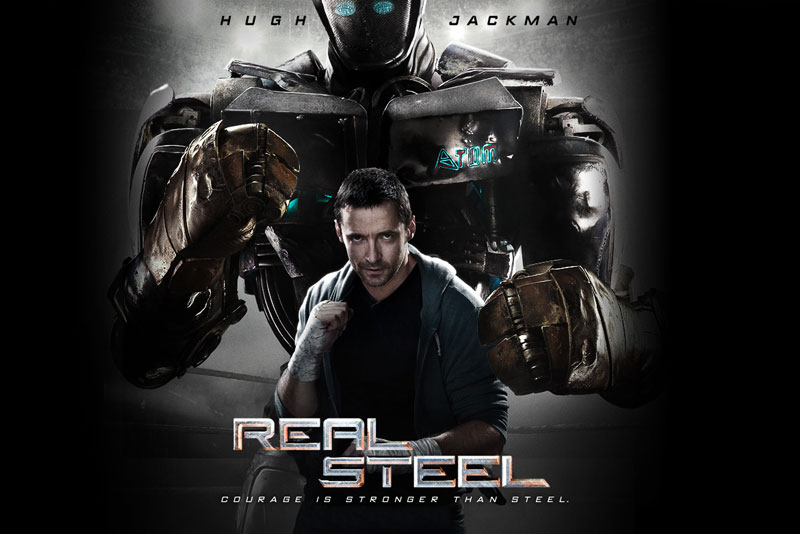 Thanks to Disney Australia, we had the chance to see Shawn Levy’s new film ‘Real Steel’ before its Australian cinematic release. This is our review of the film – but as usual – no matter what we say; we recommend that you still go to your local cinema and see the film because: There is no better critic than yourself! Set in the future, ‘Real Steel’ tells the story of a retired boxer Charlie Kenton (Hugh Jackman) who lives in a world where boxing is no longer what we know, because 8 feet steel robots controlled by humans have replaced traditional boxing.  Charlie doesn’t have much money and has a gambling problem that costed him his last robot boxing fight. To make the matters worse, his young son Max (Dakota Goyo) is forced to come back to his life after his mother passed away. In addition, Charlie lives with his girlfriend Bailey (played by ‘Lost’ star Evangeline Lilly) in her father’s gym, where Charlie used to be the biggest boxer.

Charlie, who was never been there for his son since he was born, slowly develops a good relationship with him although it was complicated at the beginning. They discovered they have a common interest in rebuilding and fixing robots with bits and parts of junk yard scraps that will take them in an unexpected journey into the World Robot Boxing Federation, after finding an old sparring boxer that Max named ‘Atom’. After seeing the trailers of the film, our first thoughts were that the film will be a mix between rocky and transformers, with tons of especial effects in between. Moreover, we were afraid that we will experience a new disappointment like “Transformers: dark of the moon “. However and proudly we can say, that we were wrong, because the film has so much emotions and heart that you can imagine. The story centred not in the robots (which are cool and well designed, we`ll talk about them later) but in the relationship between father and son and it’s so well done that you get into it. The movie didn’t fall for the typical mistakes of other films where you put a kid because the director wanted him thus ruining all the potentials (e.g. ‘The Legend of Zorro’). The kid in the film is necessary and well-selected, with young talent Dakota Goyo performing in a great way making the public felt like they are close to him during the film. Australia’s Hugh Jackman is fantastic; it is a perfect role for him. It shows that he can give justice to any kind of character that he portrays. Add to that, the amazing work off-screen that Jackman did with boxing legend Sugar Ray Leonards, who was the boxing consultant for this film, a detail that you’ll notice in every single boxing scene in the movie. This is a fantastic move from the production which took care of every tiny detail, of which it is extremely appreciated.

On the other hand, Evangeline Lilly plays a correct character in a role that totally fits her, However, she doesn’t have much presence on-screen, because the focus of all is on Jackman and Goyo. Nevertheless, she brings a bit of more feminine emotions to the movie, avoiding cheesy clichés and unnecessary romantic moments, a thing that we really appreciate.

Overall, in terms of acting, no matter how minor was the appearance of all the cast, all of them had a moment to shine, with no funny or unnecessary characters at all in the film.

The story is simple, with a notorious inspiration and references to the Rocky movies, but despite the similitude, you will be full of adrenaline while watching the film that you will not even noticed that it was almost 2 hours. Moreover, we saw kids and adults doing boxing movements and even cheering for the Jackman’s robot ‘Atom’ to win and suffering with every punch back, an effect that we haven`t seen in long time in cinemas. The special effects are ‘world class’, nothing looks fake at all, you even get unsure if the production actually put real robots fighting to do the film, because they look so real, due to an amazing CGI work. Furthermore, the designs are great, with a lot of variety and colourful creative robots, going from old models to more hi-tech ones. Furthermore, their fights happened in different scenarios going from underground battles to the main league fights for the championship. The last one made us feel like we were watching an episode of the WWE or UFC, with the crowd (even at the cinema) getting mad for their favourite fighters.

‘Real Steel’, is for sure one of the greatest surprises of the year, is a film with lots of emotion and a lesson of life. A must see family film that for sure you can enjoy with your entire family and obviously with the little ones at home…GO ATOM!