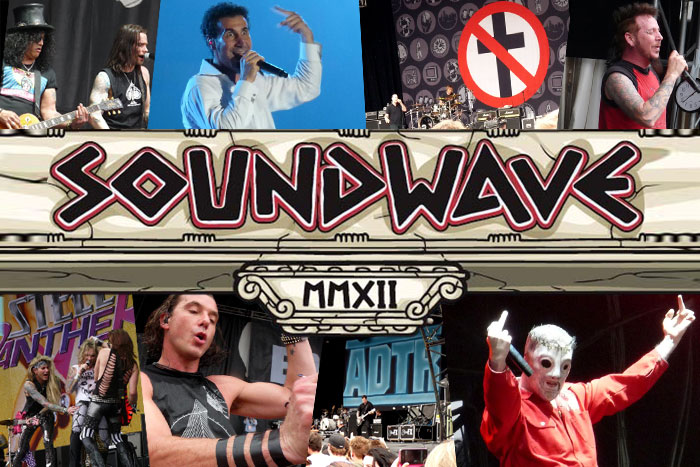 On Sunday 27 February 2012 , the iconic Sydney Olympic Park was fully setup to host a new national sport: ROCK AND ROLL! The Soundwave festival took over the place with 11 stages ready to make as much noise as possible in one of the biggest line ups ever including Steel Panther, Coal Chamber, Hell Yeah, Zack Wylde’s Black Label Society, Lamb of Godd, Marilyn Manson, Limp Bizkit, Slipknot, Alter Bridge, Bush and System of a Down, just to name a few.

We kicked off our Soundwave day with bad ass rock and roll chicks Cherri Bomb, a band full of energy that reminds us of the classic Runaways and Heart, in a great presentation. Then we moved to stage 2 to see one of the most anticipated and best bands in the event – Steel Panther and the guys did not let us down with a solid program full of good rock, glam and their unique style of interactive humor with the crowd i.e. Lexxy Foxx playing his classical dumb blonde role looking at the mirror and fixing his makeup. Michael Starr is a total rock star and as he said, he is a skinny version of Vince Neil from Motley Crue which truly reminds us of Motley’s front man in his golden years. Satchel is like the MC of the band with his funny speeches in between songs and rocking like a metal God on his guitar. Finally, “the best drummer…of the band” as they band mates said Stix, is an awesome drummer who undoubtedly knows how to rock and hype up the crowd. Steel Panther played approximately 30 min, including their hits “Eyes of a Panther“, “Death to All but Metal”, “Community Property” and their new hot hit dedicated to tomcat golf player Tiger Woods. Great show and we look forward to a Steel Panther headline tour in the future.

Later we went for a bit of Moshing at the metal stages to see Hell Yeah, a band reminiscent the peak period of Pantera, with fantastic sound and obviously an amazing drummer like Vinnie Paul and a singer like Chad Gray. They brought real metal to Sydney yesterday! We came back to Stage 2 to see Miles Kennedy’s Alter Bridge, a band that took over the stage with a well-selected list of hits and a frontman who has one of the best voices in rock and roll – reason enough for legendary guitarist Slash to choose him as his front man in his own project. However, and speaking of Slash , Alter Bridge had a big surprise for all the Aussies as a very special guest wearing a “Top Hat” joined the band for their last song…and yep it was Slash joining his friend and rocking like the Guitar hero he is, making the crowd go wild in front of that stage…Alter Bridge was simply awesome! We saw A day To Remember from the side, a band with a singer (Jeremy McKinnon) who can really scream and has the ability to let the crowd to do what he wants, forgetting all the security warnings, with as much moshing and crowd surfing as possible, turning stage 1 and 2 into massive war arenas, fortunately with no casualties or major accidents to lament. Bush was next, and it was a band we really wanted to see. Gavin Rossdale took control of the stage immediately playing their hit Machine Head. Alongside his band mates Robin Goodridge, Chris Traynor and Corey Britz, they put together a flawless show that even included a cover of a classic Beatles song  – ‘Come Together’.

After Bush we took a short break which sadly left us outside of the main stage, unable to see Limp Bizkit at a closer spot and made us join the chaos of fans pushing at the main entrance to try to get in. Thankfully, security and staff did their best to control the situation. Limp Bizkit was definitely a highlight on the day, with Fred Durst on stage singing at his best. Durst, stopped to remember and dedicate all their performance to Jessica Michalik, who passed away at the band’s appearance in 2001’s Big Day Out. Durst told the crowd that he didn’t want to go on stage at that time for security reasons as he knew the barricades were weak but BDO organizers ordered him to go on stage, saying that otherwise there will be a huge riot. Durst also thanked Jessica’s father for joining them, as he was there in a very emotional state where Jessica’s name was on the screen throughout their performance.

Limp Bizkit, played approximately 45 min including their hits, My Generation, Nookie, Take a look around, Rollin’ and Faith in a great show cast that incorporated some small covers of Nirvana and obviously DJ Lethal’s touch with a bit of House of Pain.

Right after that, the ultimate controversial rocker and many peoples’ all-time favorite Marilyn Manson jumped on stage with his band mates.

Manson played his greatest hits such as Sweet Dreams, Mobscene, Rock and Roll is dead, The Dope show and Irresponsible Teens. And he truly knows how to create drama. While he was meant to play Antichrist Superstar, he left the stage with no reason, confusing his band mates and making the crowd really angry who then shouted “SLIPKNOT” as loud as possible. It all cooled down after some minutes, when Manson came back and played his anthem “Beautiful people”, setting the stage for the next act: Slipknot Slipknot doesn’t need introduction. They brought the pyrotechnics to Soundwave with all the band members performing one hell of a show fronted by Corey Taylor singing his ass off in every song. A very active number 6 (Clown) and 3 climbed and took over their percussion while Jim Root and Mick Thompson rocked like demons with their guitars.

One of the epic moments was when Corey made the entire crowd to sit down for Spit it out, moving thousands of people to jump at the same time. Also, Paul Grey’s spirit was present at the venue, when the band dedicated the song Duality in the memory of their band mate.

Another crazy moment of the show came from Sid Wilson (number 0) who climbed the sound mix tower and jumped at the crowd from a distance of approximately 3 meters in order to pull one of the craziest crowd surfing stunts in the history of Soundwave. Slipknot played 15 hits in total including songs like Psychosocial, People = Shit, Left Behind, Heretic Anthem, closing with Surfacing which features some amazing drum solo from Joey Jordison (number 1). His spinning in 90 degrees drum kit made the crowd go mad again in a flawless piece from a band who really knows how to put together a world class show.

Our legs were in so much pain after so many hours of rock…However, despite how tired we were, we still had energy for one more band: the headliners of the festival System of a Down – a band that put on a perfect show of 25 songs for their loyal fans with hits like Chop Suey, Toxicity, Lost in Hollywood and Hypnotize so on. And one of the greatest things about System is that they don’t need a huge stage, polemics or unreal pyrotechnics to demonstrate why they are one of the best rock bands in the world. They only need a great singer like Serj Tankian, a solid guitarist and second voice like Daron Malakian, an outstanding bass player like Shavo Odadjian and an unique drummer like John Dolmayan, because this band sounds just as magnificent live as in their albums. In fact, let us tell you, they sound even better!

System did a mind-blowing close of the show, playing 1.5 hours which left every single person in this Soundwave Festival with a big smile on their face and a massive rock and roll hangover that will go on for days and we are not even counting the sideshows yet!

WE REALLY CANT WAIT FOR NEXT YEAR…BRING IT ON SOUNDWAVE 2013!