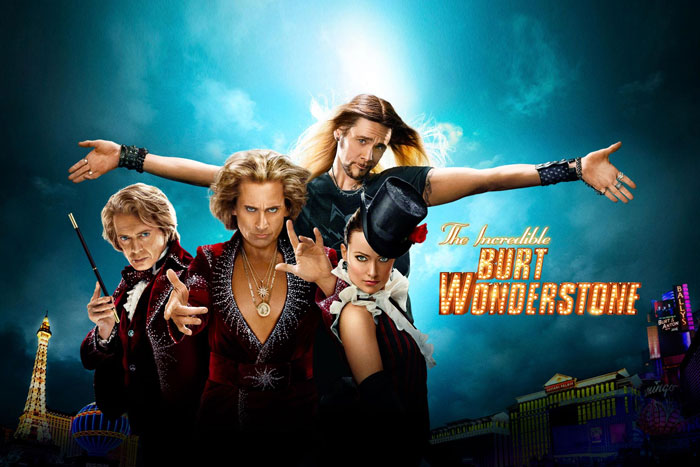 By R.Best
Thanks to Roadshow Films, we were able to attend a preview screening of ‘The Incredible Burt Wonderstone‘ with an all-star cast including Steve Carrell, Olivia Wilde and Jim Carrey. This is our review of the film – but as usual – no matter what we say; we recommend that you still go to your local cinema and see the film because: There is no better critic than yourself! Essentially, the film is about show biz rivalry. Set mainly in Las Vegas, the movie follows the rise to fame of friends, and magicians Burt Wonderstone (played by the always hilarious Steve Carrell) and his childhood best friend Anton Marvelton (Steve Buscemi).

Some many years later, Wonderstone and Marvelton were separated by a quarrel started by their overdone routine act, which becomes tested by component and rival magic act Steve Gray (Jim Carrey). But eventually re-kindle their act and friendship, with the inspiration of mentor and the reason they began magic in the first place, Rance Holloway (Alan Arkin). Ultimately, I’d recommend that you watch it for yourselves and make up your own minds. But from Steve Carrell’s ridiculously awful tan to Jim Carrey’s hair and stunts, we thought it was hilarious, to put it simply.

The Incredible Burt Wonderstone is now showing in Australian cinemas.