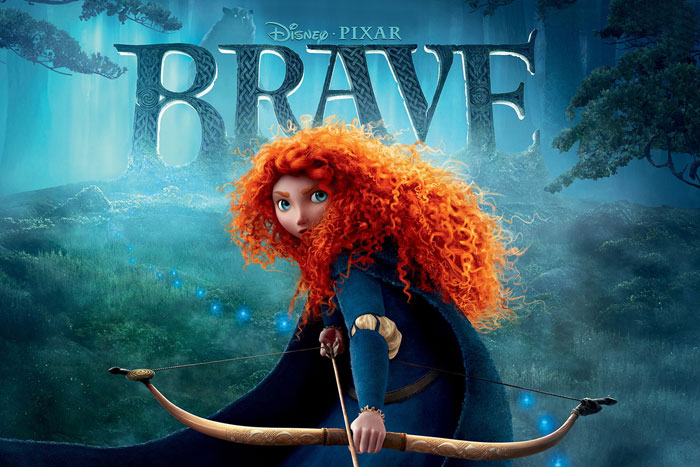 At this year’s Sydney Film Festival following our interview with Billy Connolly, we had the chance to see Pixar’s 13th creation Brave at the Australian premiere of the film. This is our review of the film – but as usual – no matter what we say; we recommend that you still go to your local cinema and see the film because: There is no better critic than yourself!

Brave is the new animation from the masterminds behind Wall-E, Up and The Incredibles. It is the story of Merida (Kelly Macdonald), a Scottish princess, daughter of the legendary Bear killer King Fergus (Billy Connolly) who wants to master her own destiny after she finds out that she must marry a warrior from one of the 3 clans which is a rule set by her strict Queen Mother Elinor (Emma Thompson). But Merida, a spirited girl gifted at archery decides to run away and find a way to convince her mother to break such awful tradition. While in the forest, she meets a witch who might have the solution to her trouble by cursing her mother to have an accident, possibly changing her destiny for good or for bad.

Brave has a very simple plot where the mother-daughter relationship is the center of the story highlighting female characters while the male ones are more decorative and used to bring the humor to the film, such as the very funny King Fergus, a true warrior who loves to eat, party all day and enjoys a good fight.

The film is not as moving as Wall-E or Up but it still stands in its own way, exploring a new area for Pixar, using strong female characters and less comedy, making the film very dark and scary sometimes for kids. It is essentially a classic princess story closer to Disney style instead of Pixar which might or might not be enjoyed by die-hard Pixar fans. Yet despite not having big Hollywood stars behind the microphone, the voice cast is a very clever selection of the fantastic Billy Connolly whose character fits him perfectly and an even better Emma Thompson and Kelly Macdonald as the female leads speaking in perfect Scottish accents. Their performance is so brilliant that you don`t even notice who the rest of the voice cast is, which includes Robbie Coltrane and Craig Ferguson.

In terms of animation, Pixar once again blew our minds with visually stunning sequences and unique textures and lighting, using some sinister touches for this film specifically. The art direction and character design is flawless as the attention to detail begins from the hair on each character to the digital backgrounds creating marvelous Scottish styled landscapes. Overall Brave is an enjoyable film, though lacking a certain quality which past Pixar films has (except for the disappointing Cars 2) but it is still a good story with a deep message to enter the Pixar Hall of Fame (However, the message ‘Create your own destiny’ is not used consistently, just like the concept of magic or the villain in the film – a giant black bear –  making you feel that Pixar could have extended the story for another half an hour.

Perhaps the 3D version will impress people more as we saw it in 2D at the Sydney Film Festival because from past experience, the best 3D films are usually animations. Regardless Brave is still a must see film for all Pixar lovers as it used all the signature elements to create this new adventure, without taking much risks but exploring some new features.