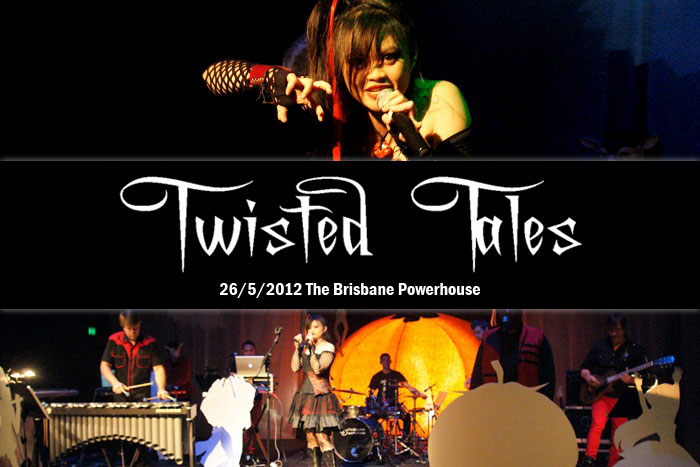 We were delighted to catch Yunyu in the Visy Theatre at the Brisbane Powerhouse; a venue small enough for eye contact to add impact and humour throughout the show.

The stage was set for an evening of demented delights. A backlit pumpkin toward the rear of the stage; to the sides were wispy white drapes with projections cast upon them. Adorning other parts of the stage were white ghostly images of Cinderella’s carriage, and a variety of other characters. Characters of which we would hear Yunyu sing about in her modernized retelling of some of the most well-known fairy tales. Her Royal Madness whet our appetite with some of her earlier songs such as Too Subliminal and Lenore’s Song; reintroducing us to her style, letting us get comfortable before blowing us away with more recent songs from Twisted Tales.

Through state of the art Animation, by New York Times #1 bestselling Manga Artist Queenie Chan, and further visual depictions by The Commonist and Imogen Ross; Yunyu successfully blends her off center style of storytelling with live music.

We venture into places of the fairytale psyche you wouldn’t expect to go. The Pied Piper isn’t so harmless, but is in fact a cult leader. The Blue Fairy wants to release Pinocchio from his burden of living up to his father’s expectations. The little match girl wants you to buy her a moment of peace in a world full of injustice. Dorothy isn’t in Kansas anymore, but instead finds herself in space and the butterfly lovers are the only ones to find true love… in the end.

Yunyu is taking her Twisted Tales tour to Victoria and New South Wales in June. Whether you’re a spiderling at heart or just have an offbeat sense of humor I suggest you check out this macabre madam when she comes to town. With this much collaborative genius in one show, you’d be crazy to miss her.

We must thank Belinda and Darrell Hamilton for this amazing coverage!