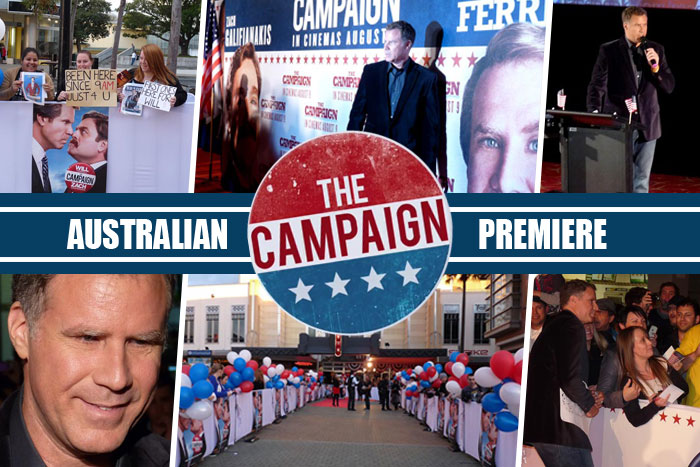 The Australian premiere for Jay Roach‘s new comedy The Campaign was held on 5 August 2012 at Hoyts Cinemas Entertainment Quarter.

The venue was transformed into a typical US environment in election time with red, white, blue balloons, standees and an excited crowd holding flags to welcome the main guest of the event, funnyman Will Ferrell who plays the role of candidate Cam Brady in the film.

Three die-hard Ferrell fans arrived at 9 am to get the best spot to be up and close to their idol while most of the crowd arrived around 4:30 pm (let’s be honest, the red carpet was a bit messy as the fans in the media area had to move since they were told that Ferrell might not stop in that area but set to be driven inside in a car, like a true politician). It was as a cool entrance for Ferrell (at the cost of fans sacrificing their good spot) but Mr. Ferrell was rushed in and missed out on the chance of greeting his fans.

Will Ferrell arrived around 5:30pm in a black Audi Van and was immediately escorted to do some official interviews, followed by some quick autographs and a couple of photos with the fans nearby. Mr. Ferrell then continued his media duties and we were lucky to have the chance to speak to him for a minute about his character as a politician and his imitation of president George W. Bush on Saturday Night Live. We were even updated on The Anchorman 2 by the man himself. (Check our interview below)

Afterwards, Will Ferrell resumed interviews until he finally got the chance to see some fans on the red carpet, even getting a present of a portrait of him made by a huge fan of his.

Mr. Ferrell posed at the official media wall quickly, finishing with a very funny speech to introduce the film, including jokes about Robert Pattinson and Kristen Stewart‘s break up.

Here, enjoy some postcards of the event below:

The Campaign opens on 9 August 2012 from Roadshow