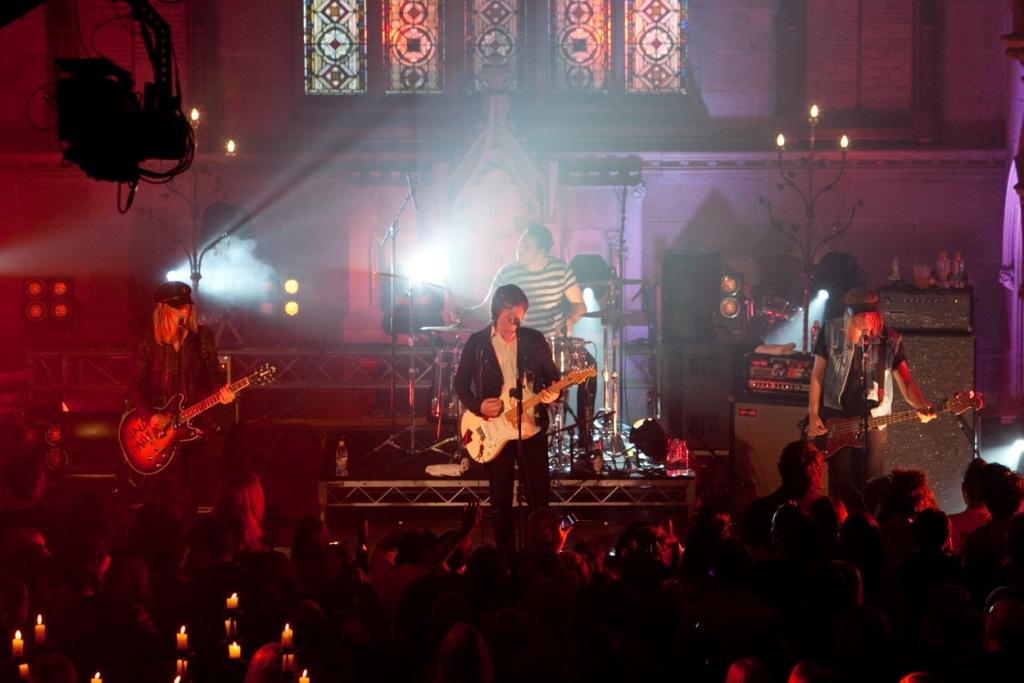 The Vines wowed the crowd at at last night on the eve of the release of their fifth studio album, “Future Primitive”. The band showed fans just how rock’n’roll should be experienced, putting an amazing show inside the church.

A very select crowd of fans, media and VIPs were served with drinks and appetizers by gorgeous Russian Standard Vodka models. After hitting the crowd, the excited audience went inside to attended the gig. There, an amazing atmosphere, a stunning church ready to rock.  The audience was transfixed by front-man Craig Nicholls as he belted out a selection of brand new tunes and old favourites. Clearly in their element, The Vines delivered their most recent hit “Gimme Love” alongside tracks such as “Get Free” and “Ride” in the grungy garage-rock style that is synonymous with the band.

The new single and title track from “Future Primitive” was warmly received by an enamored audience, who reveled in the electric atmosphere provided by one of the country’s most accomplished bands and the dramatic venue.  Ruby Rose, Chris Joannou (Silverchair), Laura Csortan, Tom Williams, Daimon Downey and Rai Thistlethwayte were among the well-known faces who joined die hard Vines fans to experience music as it should be; live, intimate and authentic.

“The lucky few who were here had the chance to experience real music thanks to The Vines amazing performance in this unique venue,” commented Andrew Skehan, Senior Brand and Business Manager, Beam Global Australia. “The atmosphere was buzzing even before The Vines went on stage, thanks to our gorgeous Russian Standard Vodka Models who treated guests to authentic Russian demi-shots of Russian Standard Original served with Black Pearl Epicure caviar, as well as the refreshing Russian Standard Vodka Citrus RTD.”

Simon Joyce, CEO of MCM Media, was also thrilled with the band’s performance, saying “The Vines were electric – it’s no wonder they have made such an impression all over the world through the course of their career.  It goes to show how incredible a scorching live rock set is, in this intimate and exclusive environment, and tonight The Vines well and truly delivered on all the elements that make Live At The Chapel so special.”

Around the world, music is a major focus for Russian Standard Vodka. It’s partnership with Live at the Chapel in Australia offers the complete experience for music lovers thanks to real music and real vodka.

Better than words, here enjoy some postcards from last night:

To see exclusive photos and videos of the event visit:
www.facebook.com/RussianStandardAustralia.

Also don’t forget to tune in to Go! at 1pm on 12th June for the full TV broadcast.

As a bonus, check the setlist of the venue below: