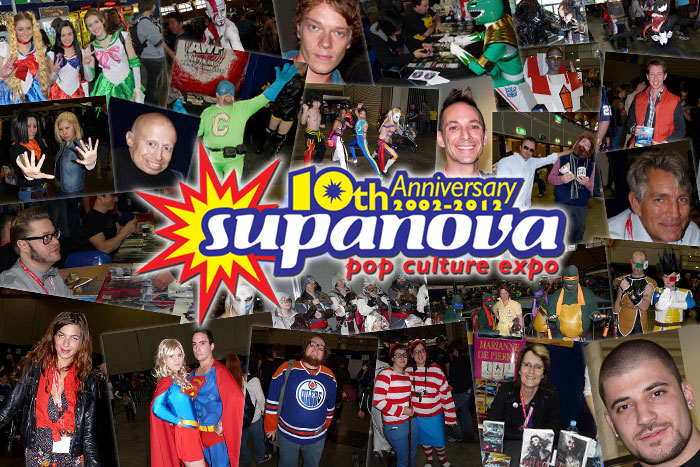 On 16 and 17 June 2012, we attended one of our favorite events of the year –  Supanova, currently celebrating its 10th anniversary.

This year’s line up is one of the biggest so far with the likes of Christopher Lloyd, Eric Roberts, Alfie Allen, Natalia Tena, Tricia Helfer, Noah Hathaway and Verne Troyer on the bill, just to name a few.

As expected, the Sydney Olympic Park Dome was a full house of cosplayers, families, comic book and video game fans walking around, turning the place into a true celebration of Pop Culture.

Fans lined up patiently to get their photos and autographs with their favorite stars, and as we saw in Supanova Brisbane, Christopher Lloyd once again was the most popular with an army of Back To The Future fans ready to meet their idol.

Other amazing artists include Tom Taylor and The Walking Dead artist Tony Moore who equally had a long line of fans looking to get an original sketch or comic book signed by him. Mr. Moore was kind enough to speak to every single fan for the joy of all his followers.

Q & A Panels were of course there for the supa-stars and the classic cosplay competition includes an all-time classic such as the Kameha contest.

Fans were also able to meet their favorite writes, such as Marianne de Pierres, Matthew Reilly and Eragon’s  Christopher Paolini.

Overall Supanova was a fantastic event as usual which will continue this weekend in Perth.

Here check out our Mega Supa-Gallery Below:

Click here to find out more about Perth’s Supanova…A MUST GO EVENT!