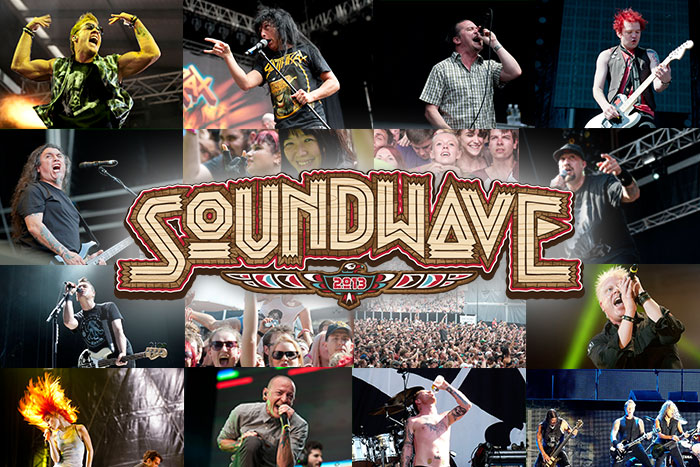 What a day it was when Soundwave returned to rock Sydney on 24 February!

In perfect organization and set up, the first performance of the day kicked off at 11 am.

There were many stores as usual at the festival, selling food, merchandise and games plus free water and sunscreen, showing how much thought have been put in to cater the public.

The first act we saw was Chris Jericho’s Fozzy on Stage 5, who has die-hard fan base thanks to the unique energy of each team member, while Jericho moves around like a metal God. Great moments were when they played their new song “sandpaper” as the whole crowd sang along, amidst their catch phrase “Fozzy Fozzy Fozzy Oi Oi Oi”.

We then moved to the main stages at ANZ stadium, allocated the first time for Soundwave, just in time for Anthrax – one of the best live bands ever with an amazing Joey Belladonna and Scot Ian on rhythm guitar. The band paid tribute to two rock gods who passed away – Dio and Dimebag Darrell from Pantera, and surprised audiences by playing AC/DCs TNT.

Mike Patton’s Tomahawk was next, whose Faith No More frontmen once again showed us who he is, leading a great band that warmed up the crowd despite the pouring rain. Patton, talkative and funny made jokes like “an applause for us, the only band with no tattoos and one of the few here with our original drummer”.

The moshpit went wild when Bullet For My Valentine hit the stage, making everyone feel their strong presence. They played songs from their new album “temper temper” and classics such as Fever’s “Pleasure and Pain” as the crowd go mad doing crowd surfing, etc.

Kyuss Lives followed, playing a safe set but not many people were familiar with them.

Along came Stone Sour, featuring one of the best frontmen in the world – Slipknot‘s Corey Taylor who shared the stage with his old bandmate Jim Root on guitar. Stone Sour was simply awesome, covering songs from every album as Taylor moves from stage to stage, talking to people and giving a good vibe. He even promised to join the crowd later to see other bands and promoting their new release House of Gold & Bones Part 2. Slayer ensued, who owed Sydney after Tom Araya`s illness on their last Soundwave show. They certainly didn’t disappoint with a very active Kerry King and a fantastic last minute replacement drummer rising up to the challenge and completely rocked their way through.

Perfect Circle was an odd one as we feel they were using the wrong stage since their music is very different to all the other bands at ANZ. Many Tool fans made their way to see Maynard, while the rest sat, listened and rested for what was to come.

Then Linkin Park came on and man, were they amazing! Known as one of the best live bands in the world, Chester’s electric voice recharges everyone as Mike Shinoda brings hip hop to the house, in everybody’s favorites like Numb, In The End, and their new single Burn It Down. However, while Points Of Authority was playing, a fan fell in the moshpit and everything came to a pause til the man was attended to. So the band asked the crowd to be mindful, showing their concern and professionalism, finishing with One Step Closer.

As we waited for the big moment of the night – Metallica, we heard about the unfortunate news with Garbage who could not perform as their equipment did not arrive in time due to flooding. Furthermore, a foolish person injured some fans with a flare at Bring Me To Horizon‘s show but thank God things were not as bad as they were initially reported. Running 20 minutes behind, the lights finally went down and screens lit up to welcome the one and only Metallica! Unfortunately our photographer did not have access to shoot them due to restriction but fans were generous to lend a couple of snaps for illustration purposes.

Metallica was as mighty as usual, with Robert Trujillo celebrating 10 years with the band, making this a special occasion, Lars firing up behind the drums, Kirk rocking the guitar and James Hetfield getting up close and personal with the crowd. They played Master of puppets, Sad but true, One, Unforgiven and so on during their 2 hours on stage, going out with a bang in Seek and Destroy as balloons fell from the sky.

This is definitely one of the best Soundwave in history! BRING ON SOUNDWAVE 2014!

Here enjoy some shots taken by our very own photographer Christina Mishell, plus a couple of *Metallica’s fan pictures from the moshpit.

*Metallica’s pictures taken by fans for illustration purposes only, no commercial gain