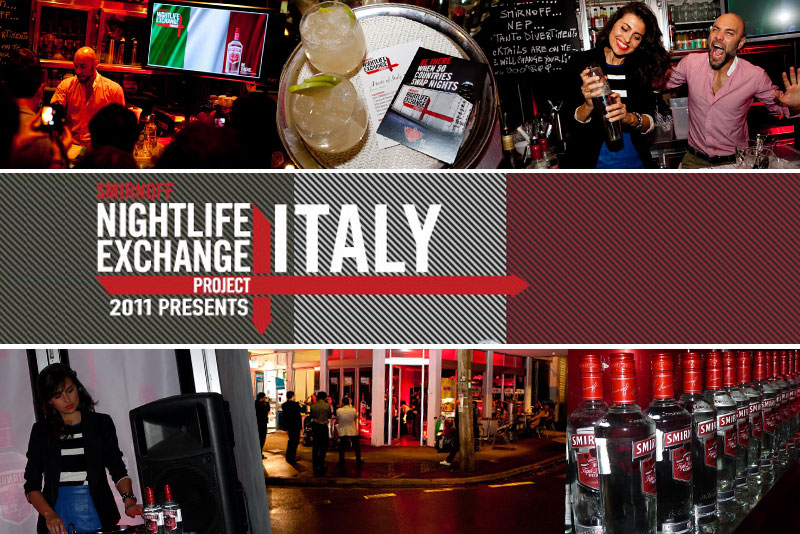 Last Thursday September 8, The Smirnoff Nightlife Exchange Project – The swap event was held in Darlinghurst’s Pop-Up Bar to announce the country which will swap theme with Australia for November’s massive exchange night.

At the beginning, we had no idea which country will be chosen, but after some clues such as the food that were being served that included meatballs and mini pizzas and incredible Italian cocktails served by Italian waiters and bar tenders, it didn’t take long for us to figured out it! And of course, it will be the beloved Italy!!!

The announcement was made by Australia’s Ambassador Anna Lunoe who was very excited to announce Italy as our swap country. Moreover, as the big event commenced, she was helped by Junior Jack & Kid Créme and Alex Gaudino to recreate the Italian nightlife experience in down under.

After that, the Nonna Smith cocktail has been created especially by mixologist Max Grecco of world-renowned Sydney cocktail bar Eau de Vie to celebrate the Smirnoff Nightlife Exchange Project in Australia and he happily showed how to prepare this delicious recipe that included a pear puree and Granny Smith apple bringing 2 girls to show the preparation step by step. This was followed by another cocktail prepared with coffee and liquid nitrogen! – yes you read it right LIQUID NITROGEN! – a perfect Italian drink for brekkie according to its creator. Obviously, both cocktails were a total success giving everyone who attended the party something to talk about next day.

If this wasn´t enough, a small exhibition of Italian scooters were showed outside the pub. I was definitely an amazing taste of what will be The Smirnoff Nightlife Exchange Project down under this November 12. We really can’t wait for that!

To feel the amazing atmosphere here check some postcards of the night: