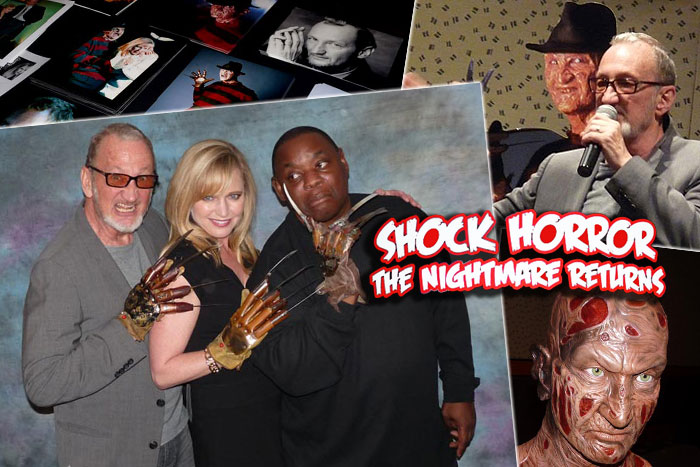 On Sunday 6 May, 2012 “Church” Street  in Parramatta was ironically renamed Elm Street as a massive Horror Pop Culture Event was held there at The Sebel Hotel with one of the most beloved serial killers in the history of horror movies, Robert Englund – Freddy Krueger – attending alongside his fellow victims Lisa Wilcox who played Alice Johnson in Nightmare on Elm Street 4 and 5 and Ken Sagoes of Roland Kincaid in Nightmare on Elm Street 3 and 4.Furthermore, they were joined by 2 iconic Australian actors, Roger Ward from Mad Max and John Jarratt from Wolf Creek, making it a perfect event to attend.

Die-hard fans arrived at the venue before 10 am in their Nightmare-Horror movies t-shirts, Freddy Krueger’s sweaters and even a zombie stripper! Doors finally opened at 10 inaugurating Robert Englund’s photography session for the joy of all fans. Mr. Englund, was the nicest serial killer ever, joking, doing Freddy’s voice while meeting and greeting everyone, wearing his iconic claw for photos, making some extremely die-hard fans cry! They also took photos with other guests, including a full Nightmare cast picture with Robert, Lisa and Ken – a priceless moment which will probably not happen again here. Following the photos, the first Q&A session started as Ken Sagoes and Lisa Wilcox jumping on stage to answer questions from everyone. During the Q&A Ken mentioned how passionate he is about writing and acting, inviting everyone to check his new comic book and his organization GBC – Giving Back Corporation, whose mission is to help people to get started in the creative business, hoping to promote educational goals among youth. Miss Wilcox on the other hand, was asked about her experience on  the Nightmare films and her opinion on the 2010’s Nightmare on Elm Street Remake, saying that they could do many remakes, but Robert Englund will always be the one and only,  amidst round of applauses.

After the lunch break, the event continued with the Australian actors, Roger Ward and John Jarratt sharing some funny experiences on their work in Australian films and the industry in general. Moreover, Mr. Ward spoke about his fellow Mad Max star, Mel Gibson while being asked about his latest behavior, joking throughout his answer while Mr. Jarratt explained the origin of the laughter on the infamous Mick Taylor in Wolf Creek.

Around 3:30pm, as some collector’s items were auctioned, the moment that everyone was waiting for has arrived as Robert Englund appeared, ready to ‘claim the soul’ of everyone there. Mr. Englund, was extremely friendly, giving long answers to all the questions, quoting from the films, mentioning his favorite kill (which was needling the deaf guy in Nightmare 6) and sharing personal experiences from his first film Buster and Billie, and a recent story where he meet Patrick Stewart and they got to share a Limo back to their hotel.

“You know, I saw it in my dream. Th-There was this horrible man…” (Alice Johnson)

As soon as Robert’s Q&A ended, the autograph session started, with a long line of fans carrying pictures, DVDs and some very weird collector’s items to get signed, such as DVD packs from Latin America, vintage toys, original posters and many more.

Overall, this was an epic event as all the public left the place with a huge smile on their face in meeting a huge icon of our Horror Pop Culture – a guy who behind the scars and all the makeup is one of the nicest and most talented actors we had ever had the chance to meet, alongside the international and Australian stars there.

We must thank Culture Shock Events, for letting us be a part of the best NIGHTMARE we`d ever have! And stay tuned for our exclusive interviews with Lisa Wilcox, Ken Sagoes and the man himself, Mr. Robert Englund.