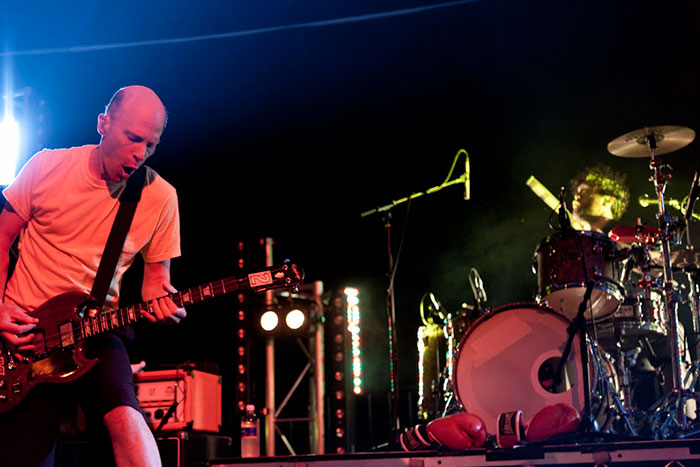 The Presidents of the United States of America rocked the house at the Roundhouse on the 15th of March, who were touring around Australia

The first to grace our presence was the band ASHES, who are a Sydney band who have a passion for straight-up rock melodies. The boys played a solid set, with a sound which could be compared to Gyroscope, who is proud of their Aussie roots. They started the night of with a bang, working the stage like pros, but still with a hint of naivety of an upcoming band. The boys demonstrated an impressive display of riffs, never forgetting to have the crowd involved. It was a bit of a shame that the crowd didn’t expand to its massive size, as these boys from Penrith did a wicked job at entertaining the crowd.

Next on stage appeared a pop-rock band called HEY GERONIMO, who are an indie pop-rock band all the way from Brisbane. They brought to the stage a wide variety of catchy tunes, with the additional extras of a trumpet section to the mix. They played many songs from their self titled album, including that of “Co-op Bookshop”. They even managed to charm the now sizeable crowd with their cheeky banter, than blew the crowd away with their version of “Burning Down The House”. We highly recommend checking these guys out.

Despite their hard effort and their amazing set, it’s hard to please a crowd while playing for someone else’s crowd, especially when the audience continue to pine for The Presidents. By this stage, the crowed had expanded into a massive proportion.

Chris, Jason and Andrew appeared on stage and wasted no time ripping into their song “Tiki God” and “Some Postman” among many other tracks from their six studio albums. We all waited eagerly for specific songs that The Presidents are more famously known for and Chris didn’t disappoint when he proclaimed his realisation that they had yet to play anything from their self titled first album that the band is more commonly known for. Needless to say, the band soon turn the Roundhouse into a madhouse as they plunged into the song “Kitty” which sent the crowd into a frenzy. This turned the crowd of full grown adults and parents into loons as they jumped and meowed with reckless abandonment. They continued to play through the entirety of their first album, which brought up a lot of heavy nostalgia for a lot of dedicated fans within the audience. They also continued to hit many peaks with even more popular songs like “Lump,” “Peaches,” and “Naked and Famous.” “Dune Buggy” was also another hit which sent the already hysteric crowd wild.

The Presidents worked the staged fantastically, with their trademark carefree attitude and charm that projected them to fame within the 90s. To further intensify the crowd, Chris called for all the lights to be killed and lighters to be brought out. Against expectations, a large majority of lighters over mobile phones managed to still the show.

Time did very little to diminish these three, who effortlessly worked the crowd and delivered such amazing songs from the 90s. They managed to keep playing their entire set with hardly a break between each song for the whole 90 minutes they were on stage.

The band fed the crowed a large variety of nostalgia tracks with such a amazing presence that left the audience wanting more. When they finished their set, the band was to return to calm the audience with a further serving of more sweet tunes before the night was out. With such an overwhelming energy, it’s easy to forget that the band consists of three men.