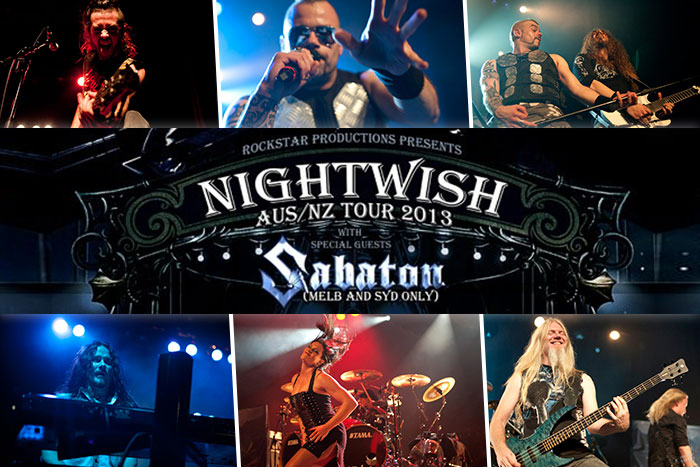 The best symphonic metal was the official soundtrack at Sydney’s Enmore Theatre on 11 January, 2013 because Nightwish was finally back in town after so many years to promote their latest  album Imaginaerum, with the amazing Floor Jansen as their new singer for the tour. Doors opened around 7pm with Australian melodic metal band Darker Half jumping on stage to warm up the massive amount of fans who arrived early, and they sure did a fantastic job. They were simply an amazing band to start the night, pumping up the crowd with their energy, enthusiasm and showmanship.

After a short break and just few minutes after 8pm, the mighty Sabaton made its big entrance, unleashing the euphoria of their fan-base who said “present”, bringing back the mosh-pits to a sold-out Enmore Theatre. Sabaton did not let down anyone with a set that included their hits Ghost Division, Cliffs of Gallipoli, White Death and Metal Crüe, leaving the entire place surrendering to them, even more so  with the very energetic and talkative Joakim Brodén introducing each song and interacting with the public as much as possible, which clearly excited the crowd, especially when he promised to comeback to Oz soon.

9:45 pm and after another short break with some ACDC tracks coming out of the speakers, the lights went off and the already packed theatre made the entire floor tremble, while the sound of composer Hans Zimmer’s Crimson Tide introduced the main act, with Nightwish finally hitting the stage with the iconic Tuomas Holopainen on the keyboards, our spotlight friend Marco Hietala on bass, Emppu Vuorinen on guitar, Jukka Nevalainen on drums and introducing their new singer, the stunning Floor Jansen. The band kicked out the symphonic metal party with Storytime, followed by Dark Chest of Wonders, in a very energetic way, which was totally transferred to the crowd, with Floor Jansen stealing the show at times thanks to her incredible voice, her beauty and vitality, especially while whipping her hair in almost every single song, like a total metal goddess. Furthermore, the entire band was a complete pack with Vuorinen moving from one side to another giving guitar picks away and with Hietala showing his unique style not only as a bass player, but also as the second voice of the band, reminding us a bit of what the great Zakk Wylde does in his shows.

Obviously many eyes were on Tuomas Holopainen and his Psychedelic way of playing the keyboard, in songs like Wish I Had an Angel, Amaranth and Scaretale, just to name a few.

Special moments of the venue were when Troy Donockley joined the band on stage playing the uillean pipes and tin whistle for the songs I Want My Tears Back, Nemo, Last of the Wilds and Gary Moore’s cover Over the Hills and Far Away, bringing the sound of the band to a brand new level and taking the audience to a mystic journey, transforming the gig into a total movie or epic video-game soundtrack at some stage.

Nightwish started to say farewell to Sydney with Ghost Love Score, Song of Myself, Last Ride of the Day and obviously ending the gig with the melodies of Imaginaerum, leaving their fans clapping for many minutes, wanting even more as the show was solid and for sure will be remembered for many years as one of the best presentations of Nightwish in Australia.

Here enjoy some killer *pictures of the show below: