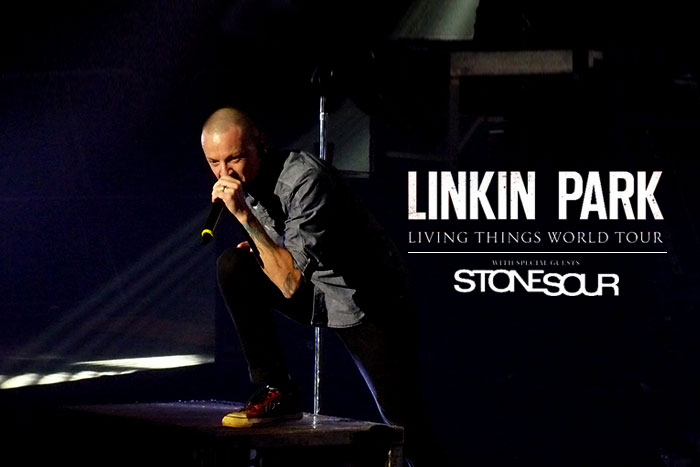 Another day, another amazing Soundwave spinoff, this time Stone Sour and Linkin Park in the heart of Sydney at Entertainment Centre. Stone Sour kicked off around 7:30 with the great Corey Taylor all charged up on the stage, alongside his band mates Jim Root, Josh Rand, Roy Mayorga and bass player Johny Chow.

The band played Gone Sovereign, followed by Absolute Zero from a different set list than the one at Soundwave. They also performed the first single of their upcoming album House of Gold & Bones – Part 2: “Do Me a Favor” which pumped up all the fans, plus 2 songs they don`t usually do at live such as The Travelers, Pt. 2 and Last of the Real.

After 8:45, lights went off as the overture of Tinfoil brought Linkin Park on stage, starting to play Faint, followed by Papercut and Given Up. Each band member did what they do best under the spotlight, of course Chester being the front man and Mike Shinoda grooved the crowd to his hip hop style. Linkin Park‘s show was visually stunning, a total live experience not to be missed as each of their concert is so unique and original. They are a band who likes to experiment and take risks which are all worthwhile thanks to fans constant support, as Mike Shinoda said.

Linkin Park played 21 songs, including classics like Numb and One Step Closer and new songs like Burn It Down finishing with In the End and Bleed It Out in their encore.

Here enjoy some *pictures of this amazing show below:


*Fan photos for display purpose only. No commercial gains.