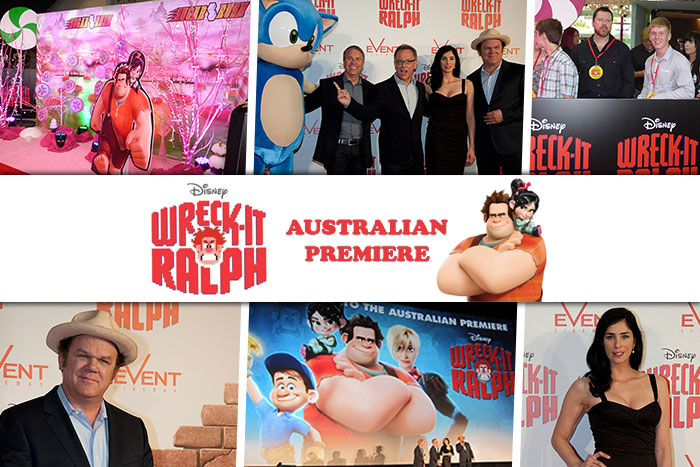 The Australian premiere for Rich Moore‘s Wreck-It Ralph was held on December 2, 2012 at Event cinemas George Street in Sydney.

The red carpet was perfectly organised, with plenty of room for both the fans and the media to get a glimpse of the action, with stars John C. Reilly, Sarah Silverman, director Rich Moore and producer Clark Spence hitting the red carpet around 6pm.

Both stars happily signed autographs and posed for photos with fans and press, especially Mrs. Silverman who showed everyone why she is one of the funniest comedians ever, joking and talking with as much fans as possible.

We had the chance to have a quick chat with both of the stars regarding the film, this is what the always funny Sarah Silverman told us: SR. Hi Sarah, great to see you in town!…

SR. What can you tell us about the first time you had a look at the script?

SS. I was totally sold, loved the idea, loved the concept, especially because I’m a video game nerd myself, so when I got the script I was sure this film will be great. Wreck-It Ralph is such a beloved video game character and I hope my character, Vanellope, gets a good reception from the kids, as it’s so sweet and has so much of my own personality in her … mmm … perhaps that was not really a good idea ha ha ha…

SR. Are you a gamer? What’s your favourite game?

SS. Yep I’m a huge video game addict … love video games and I can say I’m still addicted to playing Frogger. Many of my favourite games are featured on the film, just check it out and you will know what I’m talking about … and yes! I did play Wreck-It Ralph while doing the film … it was fun, especially if you think that you have to defeat John (C. Reilly) to keep going on the game.

SS. Not really, it all came very naturally to be honest … I`ve known John for a while and it was amazing to do this film with him and the rest of the cast, so we just stood in front of our microphones and did our best to bring our characters to life. The worst part was trying not to laugh  at some moments.

SR. Just to finish…what’s next for you?

SS. After this, I don`t really have anything planned, I’m just living this wonderful moment … I actually just released an APP, it’s called Uncle Sarah and believe it or not, it’s for kids ha ha ha. I’ll be like a mobile nanny if you wanna call it like that, as my mission in the APP is to entertain your kids with funny sounds and faces directly from your mobile phone or tablet…Cool eh?…seriously who would resist to have that on their phone? ha ha

Then we had the chance to talk with John C. Reilly who plays the role of Ralph in the film

After that, the stars introduced the film to the audience and made some funny jokes whilst giving thanks to Australian audiences for letting the film open on boxing day, as the director said, “it is a huge honour to open in one of the biggest public holidays in Australia”.

Enjoy some postcards of the venue below: