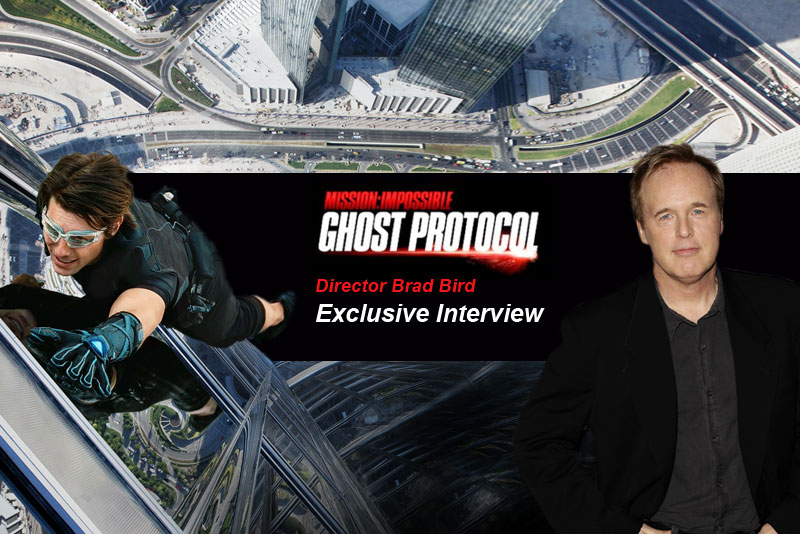 Thanks to Paramount Pictures, we had the honour of share a roundtable with the director of  ‘Mission Impossible: Ghost Protocol’, Mr. Brad Bird, famous as well for his previous films with Pixar, including ‘The Incredibles’ and ‘Ratatouille’ and for his involvement directing some episodes of ‘The Simpsons’.

Brad Bird, was amazing during the roundtable interview that we share as usual with some friends from other websites, including our friends from The League. During the interview, Mr. Bird even gave us a hint in regards of a possible “The Incredibles 2”, the differences between direct animated films with live action movies and about his relation with Tom Cruise, JJ. Abrams and The Bad Robot Team.

SR. Hi Brad, just wondering…How was the experience working with Michael Giacchino, in the soundtrack, especially in the opening sequence using such an iconic the main theme? BB. Well, Michael loves and is a big fan of other composers as I`m a fan of other directors. He knows all the composers and recognizes that the Mission Impossible theme is one of the greatest themes ever written for anything…Immediatly gets you blow up, and you immediately are ready to see something, you know, because that music makes you so…when we have this idea of doing a more elaborate title sequence for the film, he was really excited about it, and he wanted to make a different version of the theme song that very much respected the original music and play with it in a good way, so…is wonderful to work with him…you know he not only did this Mission Impossible, he also did J.J’s Mission Impossible and he did my previous movies  ‘Ratatouille’ and ‘The Incredibles’…I hope that we can always be able to work together, because he is just an amazing talent.

About a potential sequel of ‘The Incredibles’
“I Enjoyed those Characters so much, but I would not wanted to do a movie, because it will be easy to market, or wherever the sequels can be…It has to be a story that is at least as good as the one we did”  (Brad Bird)

SR-DGC.  How was directing live action performances coming from an animation background? BB. Well, you direct when you record the voices in animation and you direct the animators…Much of the world, believe the animation process is a kind of technical exercise that doesn`t involve the kind of decisions that actors made, which couldn`t be further from the true, because the best animators are in fact actors and when you ask them about what they do, they speak in the terms that actors speak, they speak about of what are the motivations, finding somebody’s  physicality, how they walk, how they set…In the very best animations the characters are differentiated by how they move, the same way that actors are differentiated, nobody would in some a way, even if you made them with the exact same body, you can tell John Way from a Robert Redford for they way they move…So the thinking process with real actors is pretty much the same, but how you are dealing with them is different, because all is there happening and in animation is split and live action all happens at once.

I think the main difference is the spontaneity, you can imitate spontaneity in animation, but is hard to achieve it in anything behind the soundtrack, because is just too time consuming in terms of resources…But in live action is all about creating an atmosphere on the set where people feel free to invent and great things can happen out of the blue, you know…you can be going on for 3 or 4 takes and is dead, and then somebody gets one little idea, and suddenly is alive again and that is something that works great there, and you realize there are other parts on the movie where that can also work…is a very alive thing.

Speaking about JJ. Abrams as a producer of the film
J.J. said to me: are they any things that you would love to see in a spy film that you haven`t seen?  and I`ve number of them, and that is the kind of question that any filmmaker always wanna hear from a producer (Brad Bird)

We`ll upload the full audio interview soon…And for more about this great interview, don`t forget to check out our friend’s websites and members of The League: Damn Good Cup, Geek Actually, The Reel Bits and Matts Movie Reviews who were with us sharing this great experience.

And stay tuned, because we will upload the part 2 of this roundtable, with our interview with the great actor and funny man Simon Pegg, who spoke to us about ‘TinTin’ and ‘Mission Impossible: Ghost Protocol’.