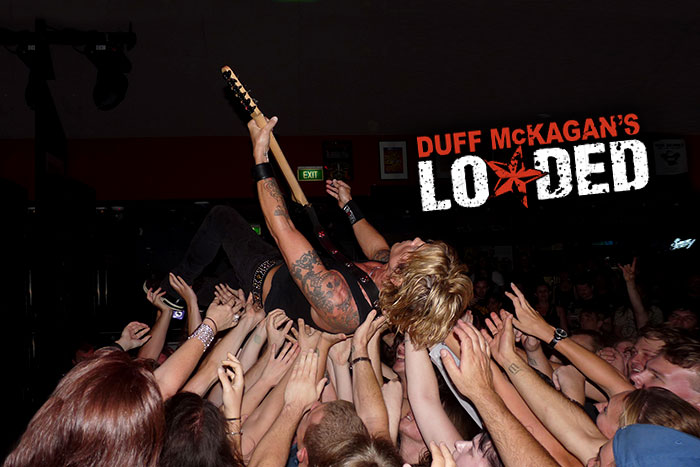 On 25 February, Sydney’s Manning Bar was the crib of the Rock and Roll, featuring Duff Mckagan‘s Loaded, Fozzy and Danko Jones live performances. At 8:30 pm, Danko Jones hit the stage, one of Canada’s best rock bands who knows how to warm up the crowd with songs like Full of Regret and Mountain.

After a short break, Fozzy (Chris Jericho, Rich Ward, Paul Di Leo, Billy Grey and Frank Fontsere) came on, bringing their unique energy for every song. Despite some audio issues, they rocked the crowd wild with tracks like Sandpaper and Pray for Blood in a show that surpassed their gig at Soundwave. Moreover, “Fozzy Fozzy Fozzy…Oi Oi Oi” was the official catchphrase of the night. Rock on! Around 10.30pm, the big moment finally came as Duff Mckagan and his Loaded bandmates kicked off, playing sick, followed by “we win” and “sleaze”. Mckagan was fun as usual, talking to the crowd and acknowledging female fans crazy love, even asked everyone to greet the team who helped the band with their equipment.

Duff Mckagan‘s voice is ever strong, pulling off their gig with some dirty garage band style sounds. He even jumped off the stage and did some crowd surfing while playing his guitar. Is the guy legendary or what?! Duff also told some funny stories from his visits downunder, conspicuously involving drugs and booze, to introduce his song “cocaine”. Following on from that, Duff was ready for some nostalgic ballad time, playing Guns n’ Roses “so fine”, and mixing “Memory” and “Patience” as the whole crowd sang along.

But that was not it, because after playing “Attitude”, he exchanged his guitar for a Bass at the screaming joy of his die-hard GNR fans while inviting Danko Jones to join him on stage. Together they played another GNR classic “Crazy” as Danko Jones took on the role of Axl Rose perfectly!

Everyone was in full submission to Duff and his band as the gig goes on where Mckagan’s treated the audience to 2 more classics – “Dust n Bones” and “It’s so Easy” to close off an unbelievable show.

This is definitely one of the best and most memorable concerts we`ve been to in years and it will surely be talked about by die hard rock fans for years.

Here enjoy some *pictures of the show below: