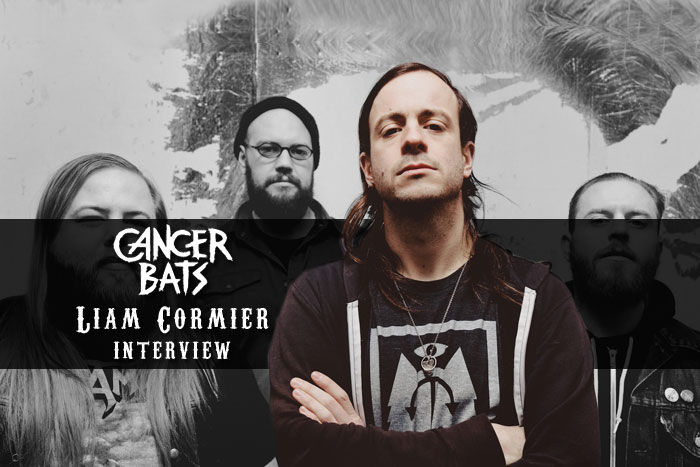 Thanks to Soundwave Touring, we had the chance to chat with the Cancer Bats’s singer Liam Cormier on the phone about the band’s new album and their upcoming visit to Australia for Soundwave 2013.

SP. Yeah, not too badly. Ok, let’s go to business…How do you and the band feel about coming to Australia next year for a massive festival like Soundwave?

Liam Cormier: We’re super excited. I mean it’s our first time doing Soundwave, so definitely a festival we’ve known about for a really long time. And it’s got a lot of friends’ bands like Slayer. So we’re really excited to be able to come. SR. As far as we know, this won’t your first time in Australia…

Liam Cormier: No, actually it will be our fourth time in Australia. We’ve come like we’ve headlined once and then we’ve come with some other tours as well.

SP. Oh, excellent. So obviously we haven’t left that bad of an impression if you were willing to come back.

Liam Cormier: Yeah, exactly. We really love it there so we’re excited to come back.

SR. Now, as far as Soundwave goes, 2013 has a really huge line-up including Metallica, Slayer and Linkin Park. What band of the bill are you most looking forward to see live there?

Liam Cormier: We’re super excited to see the ones you mentioned. Also being like Anthrax, Kyuss Lives. Getting to see Red Fang is going to be awesome. Hopefully seeing Baroness. Their new record’s going to be great so yeah, there’s going to be lots of rad stuff.

SR. Are there any bands there that you’d be interested in jamming with or yeah, having a look at doing some music with and if so who and why?

Liam Cormier: I mean, definitely, like we want to try and tour with Red Fang. That’s like a band that we’re all super-stoked on. They’re fairly similar to us so that’s kind of like a kindred spirit where we’re just like ‘Oh, that would be the best pairing ever.’ We’ve got a similar vibe and similar kind of group, so that would definitely be rad if that ever worked out.

“…we want to try and tour with Red Fang…” SR. Was there anything special that Australian fans can expect from your show at Soundwave?

Liam Cormier: I guess we’ll be playing a bunch of new tracks. You know just like, playing some favourites. Playing some new jams. Mix it up as much as we can.

SR. Are you guys planning to do Sideshows during Soundwave?

Liam Cormier: We have been told that we’ll be able to do some but the details haven’t been figured out yet. I think because they’re still like doing all the announcing, but we definitely want to do as many sideway shows as we can. For sure, it would be awesome.

SR. Excellent. So, we can expect some of those then.

Liam Cormier: Yeah, we’ve definitely been told we’ll be able to do some sideways; I just don’t know any of the details as yet.

SR. Is anything special on your personal to do list while you’re in Australia this time?

Liam Cormier: Yeah, just like hanging out. You know, like, downtown, checking out shops. Like in whatever city we’re in. One thing I love is eating as much pumpkin as I possibly can. There’s so much good vegetarian food in Australia. There’s pumpkin in everything. We hardly have pumpkin in any food. Yeah, the fact that you guys put pumpkin in burritos and stuff, it’s a very Australian thing. So I‘ll be trying to eat that as much as possible. Hopefully trying to get to some record stores too. I always love finding out about different bands in whatever country we’re in. Find out about Australian bands that are big.

SR. okay, do you have any Australian bands that you really enjoy at the moment?

Liam Cormier: Definitely from when we were over before I liked Witch Hats, and Eddy Current’s Suppression Ring. Ah, trying to think of other good stuff we found out. Basically, yeah, just going to go from there and ask a bit more. I feel like the garage scene in Australia is definitely really good. You’ve always had a good industry in that so you can find some more bands along those lines. SR. Speaking about your latest album ‘Dead Set On Living’, what can you tell us about the process of it?

Liam Cormier: ‘Dead Set’ was trying to make things…basically make an album that sounds like we do live so getting to a point where we’re comfortable with all the songs the same we would have, you know, having done two years of touring, like, live. Where everything’s second nature and it’s all like burnt to memory.

Liam Cormier: One of my favourite songs to play live is the Bricks and Mortar off the new record. It’s bouncy, super-fun and people are definitely up for sing along. It’s a really easy chorus for everyone to sing, so it’s really good to play that live.

SR. Are you guys planning a new album yet, and when might we expect if so?

Liam Cormier: Are we planning like a new-new record?

SR. Well, you’ve got a new one out already, but is there anything else in the works?

SR. What is next for you personally, rather than as a band? Apart from touring?

Liam Cormier: Well, for us right now, everything’s going pretty rad. Like we definitely, stuff with the band’s going great so any time we have time off it’s just hanging out with girlfriends and going over to a friends. Hanging out. Yeah, like trying to be normal dudes. Riding bicycles or motorcycles. Stuff like that.

SR. And are there any messages you have for Australian fans?

Liam Cormier: I mean, basically that we can’t wait. Can’t wait to come over to Soundwave and basically have the best – what we’ve been told is the best party in all of Australia.

SP. Well, mate, thanks a lot for your time and good luck with Soundwave!

Liam Cormier: No worries. Hope that we see you there.

We must thank Soundwave Touring for this chance, to Liam Cormier for his time on the phone and to our reporter Joelene Pynnonen for conducting this great interview.

For more information head to www.soundwavefestival.com