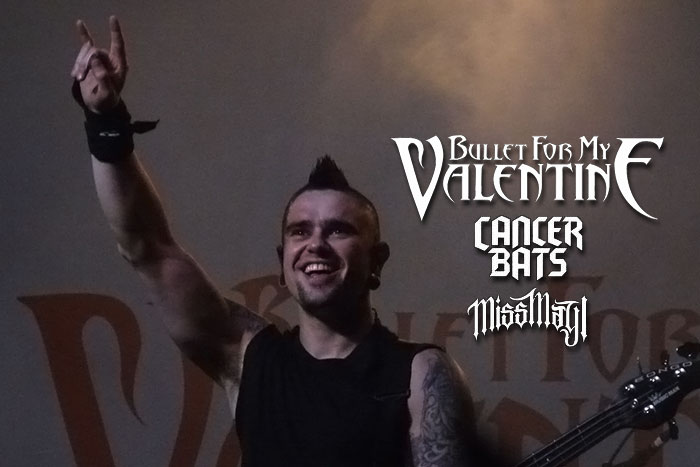 Bullet For My Valentine rocked Sydney’s Entertainment Quarter on 27 February, as a spin off from their Soundwave appearance. The party started with Miss May I, performing Forgive and Forget to warm up the crowd (divided into 2 groups – the +18 on the first floor and the underage at the balcony, a clever way to avoid any problems, especially when alcohol is involved)

After a short break, Cancer Bats came on whose energetic Liam Cormier was responsible for some crazy mosh-pits, as the first floor was full of fans jumping, pushing and crowd surfing, putting the security on the edge.. Fortunately nobody got hurt throughout.

Furthermore when Cancer Bats paid tribute to the Beastie Boys with their own version of the famous Sabotage, it made the crowd go wild at 200%. Around 10:30, lights went down as Bullet For My Valentine hit the stage with Breaking Point followed by Pleasure and Pain, in their unique, classic metal tones led by frontman Matthew Tuck and Jay James plus Michael Paget, Michael Thomas and Nick Crandle.

Within only 2 songs, the band woke up the inner beast of every fan, wrecking chaos at the mosh-pit again, this time bigger as everyone took part, especially when the band played their new song Riot. It got scary at some stage, making Hi-Fi seems to shrink within every minute, which we believe they need a bigger venue for this kind of shows. But eventually, it all cooled down as everyone clearly got tired from all the hyper activity.

Despite minor audio issues and dark illumination during the show, Bullet For My Valentine did a fantastic job, playing 15 songs from their discography, finishing off with Begging for Mercy.

Bullet For My Valentine proved again that they are a world-class live band at any length!

Here enjoy some few *pictures of the show below, directly from the mosh-pit: