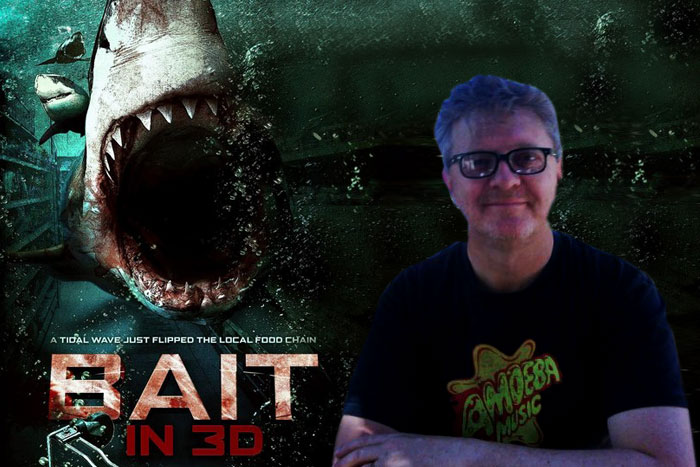 Thanks to Paramount Pictures, after seeing the fantastic trailer for the upcoming Australian film Bait 3D, we had the chance to chat with the director of the film, Mr. Kimble Rendall, who had been involved as second unit director in huge blockbuster films such as Matrix Reloaded, Matrix Revolutions, I, Robot and Underworld: Rise of the Lycans, just to name a few.

Bait 3D, tells the story of a group of survivors trapped in the underground of a supermarket, after a tsunami swallows a sleepy beach community. The current quickly floods the supermarket threatening to entomb them in a watery grave. Before long, the survivors realised that they were not alone as the tsunami has brought unwanted visitors from the depths. Their battle is not only to overcome the threat of drowning but the predator in their midst – the sinister hungry great white sharks.

Here check our interview with Mr. Rendall below:

SR. Hi Kimble, thanks so much for your time and congratulations on the first trailer of Bait 3D, the film looks visually fantastic and we are really looking forward to see the final product…Our first question is how much your previous experience as second unit director in huge films like Matrix, helped you to put this feature film together now under your full direction? KR. Thanks guys. Well, obviously being involved in huge American films as a second unit helps you to learn a lot from working on all the genres there, horror, action, fiction and their complex sequences, especially with special effects, thinking that this film as you know is shoot in 3D. You know, just the fact that you go on stage to work with incredible directors allows me to grab every single element and put it all together in one little package.

“…The second unit for me was integral, because it allowed me to use that expertise in this film…”

So it’s pretty much like that, you know you learn about the action sequences and complex visual effects and all of them shoot in 3D is technically a huge challenge and that is the stuff that I actually like doing on a big scale, so I took this opportunity to do this in Australia, to encourage doing more genre films for a big audience…The second unit for me was integral, because it allowed me to use that expertise in this film

SR. Talking about the origin of Bait 3D. When did you come on board as a director of this film? When did you read the script for the first time and you thought: “I wanna do this movie”?

KR. Well, the year before last…I was approached by the producers while I was working on The Killer Elite in action in Melbourne.

“…When I saw the idea about sharks trapped in a supermarket I thought, “this is just a great high concept…”

They approached me and sent me the script with some awesome storyboards. When I saw the idea about sharks trapped in a supermarket I thought, “this is just a great high concept” so I was attracted to the idea and then I read the script and came straight on to it, so next thing I went to Queensland to start on it straight away and to see the film has been in development for a long time, so for me it was just great.

SR. Moving to a more technical aspect. What can you tell us about the process of shooting a movie in 3D? What kind of camera did you use? KR. Well I used the Red cameras we used in Knowing, we actually did a lot of research on cameras and we have to bring one from America, because in 3D you have to use 2 cameras and with the Red cameras, we got the writers package, which is a high-resolution and because you know we have to shoot in the studio with water on it we have to be able to get the cameras up and move them during the performance. So with that package, we were for example able to put the cameras on a crane and use zoom lenses in some shoots to be able to recreate what we wanted to, even changing them if we needed to, so pretty much we designed all this set around us using and based on these cameras.

It was incredible and the results are amazing…I loved using them and the pictures are great!

SR. And the special effects. The Tsunami on the trailer looks great so we wonder how long did the CGI process go for in order to get a final product with that level of quality and obviously including the Sharks that we are guessing are CGI as well?

“…Technically the Tsunami was a process very challenging…“

KR. Well it took us approx. 6-7months I should say for us do it, because first of all we had to do the Sharks, but you know some of the Sharks are animatronics that we mixed with CGI. Technically the Tsunami was a process very challenging, because water is very hard to do and not a lot of people have done that and I think nobody has done it here I think.

SR. What about the cast. You selected a very young and talented cast for the film with some Australian actors internationally successful like Xavier Samuel and recently Chronicle’s Alex Russell plus Julian McMahon who has been in Hollywood for a while and Lincoln Lewis that we think will soon make the big step there. What’s the criteria on choosing the cast for the film?

KR. First of all it was to get good actors obviously, and as I turned up, there were a lot of Australian actors doing well in America now, overseas…so as I said I was looking firstly for very good actors for each role and secondly actors who had a profile in Australia that is able to work internationally. Obviously Julian McMahon, has already a profile in America for many years, so every actor as they were turning out they were having success internationally, you know like Xavier (Samuel) in the Twilight films and recently Alex Russell with Chronicle and Sharni (Vinson) with Step Up 3D and Lincoln Lewis who I think is about to start working in America…so It’s pretty much a combination of good luck and a good approach.

“…I was looking firstly for very good actors for each role and secondly actors who had a profile in Australia that is able to work internationally.”

There were a lot of interests from American actors as well, but we wanted to wrap up all with Australian actors

SR. You speak in a very passionate way about your cast but we want to know if there were any actor you wanted to play a role in the film and you could not get it?

KR. Not really to be honest, because we had a very clear idea of what we wanted and we were very happy with the selection we did and in my case I went straight on to it, so we also didn`t have much time to keep looking into the cast. So it all happened pretty quickly and nobody had time to keep thinking more names, so we started to meet these people quickly and all of them said “yes”, so everyone was very happy with them.

SR. Avoiding any spoilers what would you say is your favourite scene in the film shown on the trailer? KR. I like the Tsunami scene you know, working on those opening sequences was great and very challenging, because when you work on the supermarket that is like a trap and on the streets with the floods of water from the Tsunami. Also the opening sequences I think are very good, because they combine the whole backup story with the Tsunami hitting, so it was great and we spent a lot of time doing that as they were very complex.

SR. The complexity of this film. What would you say was the biggest challenge while filming Bait 3D?

KR. I would say…”Don`t shoot with water and dogs” and we had everything. When I was talking with the crew I was telling them, well let’s do one shoot at a time because you know it is such a complex film…3D Horror movie and a brand new experience for everyone.

A huge challenge was also filming over that period in a very confined space, shooting over water all the time and with all the actors having to be in that confined space over the supermarket shelves and also trying to make the sharks realistic using the animatronics which took a lot of research, and the guys doing that was very clever.

So in conclusion, I think the biggest challenges was filming in 3D in a very confined area and having the actors there on the shelves for a long period every day.

SR. Just to finish off. What movies inspired you and helped you working on this film?

KR. Well obviously you must start with Jaws, and it is obviously almost impossible to match that film because it is such a brilliant film, and also it is something you cannot avoid because it says so much about working with Sharks and animatronics. I also went through some claustrophobic films where people are trapped, like ‘Das Boot’ and horror movies in general, checking on how you construct those films.

SR. Ok Kimble, we really appreciate your time. Wish you all the best.

KR. My pleasure and good luck with all.

BAIT3D is released in Australia on 6 September 2012 from Paramount Pictures.