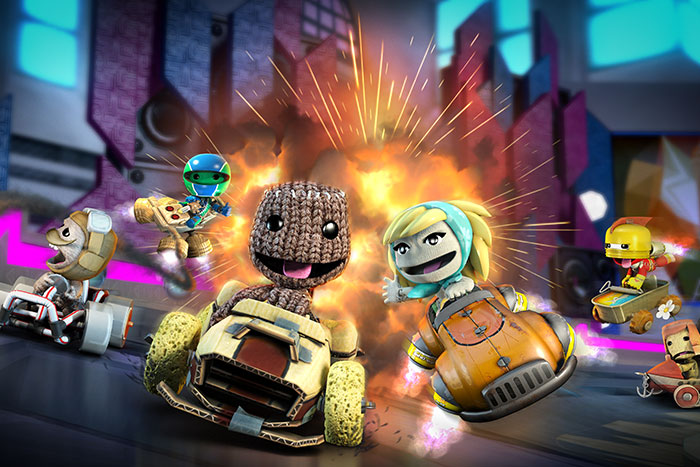 Play Station, strikes back to Nintendo’s Mario kart, releasing its own racing game using the emblematic Little Big Planet franchise as a good excuse to compete with the world`s most famous Italian-American plumber and his mates.

LittleBigPlanet Karting, is obviously a racing game, a spin-off of the popular PS3 series of games, in which the players can create their own levels to share online, customize the cars and even change the outfit and appearance of the main character on the game.

The game also features a very extended story mode in order to give you some good hours of single player time to spend around, where you must race against your rivals, and win no matter what, with the help of some tools and gadgets around the track, such as missiles, electroshock, bombs and more (sounds familiar?). Moreover, another cool feature of the game are the boss fights, where you must defeat some enemies around attacking their weak points with all your arsenal.

The graphics are great, with tons of tiny elements around decorated by colorful designs and race tracks where you might find more than one obstacle in order to be the winner. However, all the previous doesn`t actually made the game stand out as we wished, because after some minutes it turns very repetitive, and the tutorials are not quite easy to follow at some stage, making the progress of the game a bit hard sometimes. Furthermore, the physics on the game are not quite resolved, making your car hard to control at some stage.

Overall, LittleBigPlanet Karting is a racing game that really needed a bit more work, with a story mode that can be easily finished in a couple of days as its difficulty is not really hard and despite the beautiful designs, the game doesn`t bring nothing new to your console. Still, is worth checking for fans of the LittleBigPlanet franchise as the game can be lots of hours of fun if you play it with more people online.