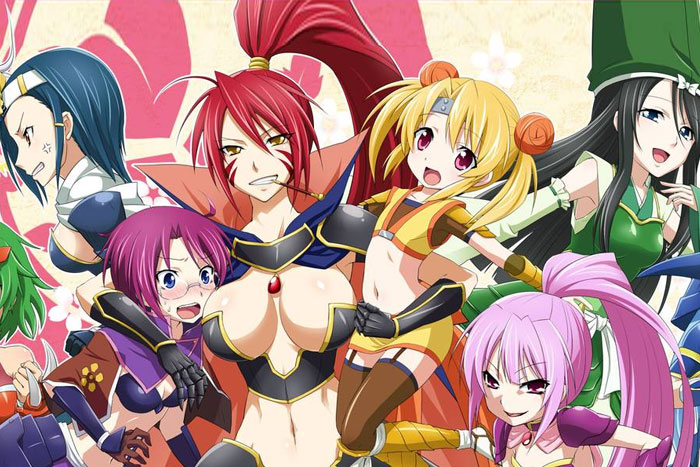 Thanks to Madman, we had the chance to see the complete collection of Battle Girls: Time Paradox on DVD.

Directed by Hideki Okamoto Battle Girls: Time Paradox is the story of Yoshino Hide (nicknamed Hideyoshi), a Japanese schoolgirl who is magically transported back in time to feudal Japan. However, this era is has a peculiar characteristic: There are no men around; all the inhabitants are girls!

Confused by recent events and thinking that she is in a weird rural area without phone reception or a train station, Hideyoshi decides to make do until she is able to find a way home. She joins the legendary warlord, Oda Nobunaga, and her loyal aide, Mitsuhide (who has a crush on Nobunaga), in their quest to locate the pieces of the legendary Crimson Armour. According to legend, the armour will help Nobunaga conquer and unify Japan.

Battle Girls: Time Paradox is a mix of well-known series, such as Slayers, Sakura Card Captor, Claymore and even Sailor Moon. Its simple storyline, tons of comedy, “super-deformers”, epic battles, magic and cast of diverse characters all make the series very entertaining and easy on the eyes.

Technically, the animation is flawless, with fantastic landscapes, art direction and great attention to detail. The battles are unique and feature the main characters testing their abilities as they face their enemies. Well, except for Hideyoshi, who has no combat skills at all, and provides most of the comedy relief, while testing the limits of Mitsuhide’s patience.

Overall, Battle Girls: Time Paradox is a fun ride, with a sense of simplicity and likeable characters that will keep you glued to the TV during its 13 episodes, especially if you want to have a good laugh, see epic battles, magic and the girl domination!…And before we forget, let us give you a piece of advice: wait until the end of the last episode’s credits as something “magic” will happen.

Battle Girls: Time Paradox is now available on DVD in Australia from Madman. Get your copy here!